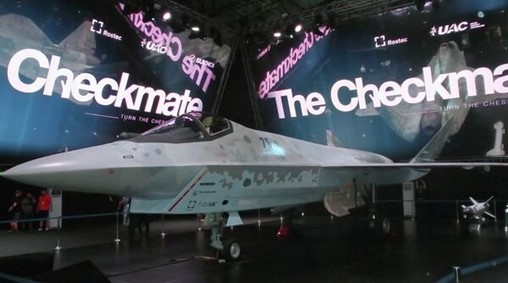 Russia's United Aircraft Corporation (UAC) unveiled its newest single-engine multirole combat aircraft, which it has dubbed ‘The Checkmate', at the MAKS 2021 international aerospace show held in Zhukovsky near Moscow from 20–25 July. Developed by UAC subsidiary Sukhoi, the Checkmate is built on a stealthy fuselage with twin vertical stabilisers and features an internal weapon bay and an under-chin air intake. An optical sensor is mounted in front of the cockpit. UAC did not detail the maximum take-off weight of the Checkmate, but said it has a 7,400 kg payload, can reach a speed of Mach 1.8, and has a combat range of 1,700 km without additional fuel tanks. Powered by a 14,500–16,000 kgf jet engine that is built on the technologies of Rostec's United Engine Corporation, the fighter is reportedly capable of manoeuvring at 8 g loads and sustained flying at supersonic speeds. The Checkmate carries up to five various air-to-air missiles and can use its active electronically scanned-array radar to lock onto six targets simultaneously in an electronically contested environment. The armament range of the aircraft integrates almost all modern Russian-designed air-launched weapons, including RVV-MD and RVV-SD air-to-air missiles; Grom-E1 and Grom-E2 air-launched munitions; Kh-38MLE/MTE and Kh-59MK air-to-surface missiles; Kh-31PD and Kh-35UE anti-ship missiles; Kh-58UShKE anti-radiation missiles; K08BE, K029BE, and KAB-250LG-E guided bombs; S-8/S-13 rockets; and 100 kg/250 kg/500 kg freefall bombs. The aircraft can also reportedly carry gun pods in its internal bays to engage lower-tier targets. The aircraft incorporates artificial intelligence components as well as the latest Matreshka automated intelligent technical maintenance system. It is reportedly configured to operate in manned/unmanned teaming operations. Already a Janes subscriber? Read the full article via the Client Login Interested in subscribing, see What we do The Power of Interconnected Intelligence