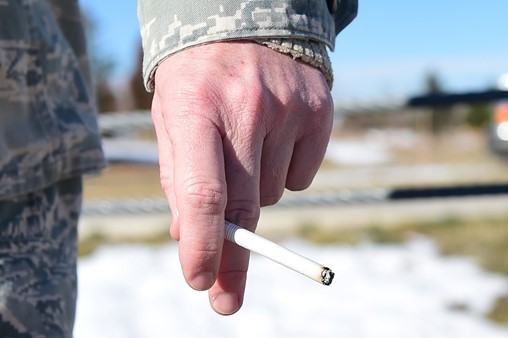 Servicemembers under 21 years old would once again be allowed to buy and use tobacco products on military bases under a proposal being pushed by a Republican senator this week. Sen. Tom Cotton, R-Ark. and an Army veteran, is expected to offer language to make the change as part of the Senate Armed Services Committee’s debate on the annual defense authorization bill, which begins later today. It’s one of more than 300 amendments the panel will consider in the massive defense policy measure. But the tobacco proposal, if adopted, would be one of the most visible provisions of the legislation for younger troops. “Tobacco doesn’t impair one’s judgment, so if young troops want a smoke or a dip on an overnight shift or off-duty hours, why should politicians or nanny-state bureaucrats tell them no?” Cotton told Military Times. “Our troops already sacrifice a lot to defend our nation. We shouldn’t wring every small pleasure out of their lives.” In late 2019, Congress passed legislation raising the federal minimum age to purchase tobacco from 18 to 21. Last summer, military commissaries ended all sales of tobacco products to individuals under 21, although military officials at the time acknowledged they would not strictly police use of the product among underage troops. Cotton’s proposal would reverse those changes just for members of the military. Any store on Defense Department property which sells tobacco products would be allowed to sell to individuals as young as 18 years old, and “any such member may consume such products on the installation.” (please select a country) Lawmakers have made similar pitches in recent years to allow service members under age 21 to buy and consume alcohol, noting that troops are trusted with life-and-death battlefield decisions and expensive military equipment. But, like those proposals, Cotton’s plan also faces long odds of becoming law, even if it survives committee debate. Military officials have strongly discouraged use of tobacco products in recent years, spending billions on smoking cessation campaigns. A 2015 federal study found the Defense Department spends more than $1.6 billion per year on tobacco-related medical care, hospitalization and lost work days. And one of the strongest supporters of raising the age to purchase tobacco products in 2019 was Senate Minority Leader Mitch McConnell, R-Ky. At the time the legislation was adopted, McConnell said that he had considered including an exemption on the new age limits for military members, in recognition of their public service. But he dropped the idea after discussions with public health advocates, saying that the military should not be “treated differently on a public health issue.” Committee members will hold closed-door debate on the authorization bill amendments on Wednesday and Thursday, with public release of their decisions expected later this week.