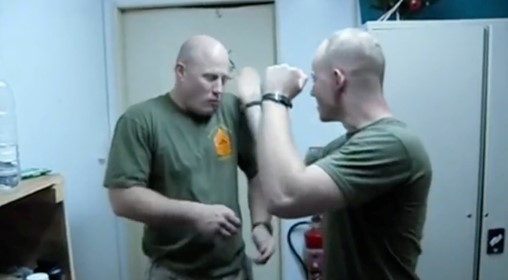 The knife-hand is as synonymous with Marine Corps culture as crayon eating, though it is perhaps slightly more iconic. “The origins of the military knife hand are shrouded in mystery and legend,” according to Angry Staff Officer. There are tales of its power, he notes, that date back to Prussia during the 18th century. But perhaps the most amusing contribution to its lore is that of a YouTube clip from Jan. 2, 2010, titled “Beware of The Knife Hands.” The video’s only description reads, “MCMAP training,” an acronym for Marine Corps Martial Arts Program, wherein Marines learn how to turn their mitts into lethal weapons. The way he drops is nothing shy of magnificent. Gen. Jim Mattis, of knife-hand fame (among other things), would be proud. Though most of the time, the knife-hand is used purely as an intimidation tactic for new recruits at boot camp, it’s good to know that striking the exact right spot can render even a hardened Marine as limp as a wet noodle. (please select a country) Observation Post articles reflect author observations. Any resemblance to news may be purely coincidental.