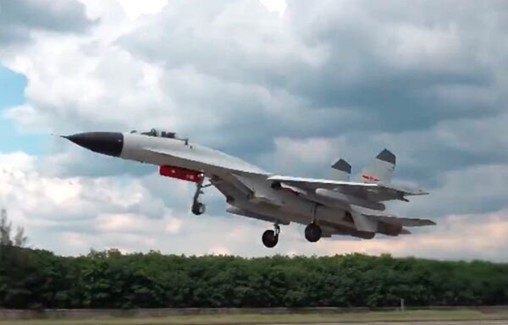 by Andreas Rupprecht & Alessandra Giovanzanti Chinese state-owned media has released video footage showing a J-11BH multirole fighter aircraft operated by China's People's Liberation Army Naval Air Force (PLANAF) equipped with a previously unseen electronic countermeasures (ECM) pod. The video, which was released on 15 July via the js7tv.cn website, shows the aircraft during take off carrying an ECM pod that is different in appearance from the KL700B pod commonly used by the PLA Air Force's (PLAAF's) J-11B fighters. This is also the first time that a PLANAF J-11BH has been seen carrying an ECM pod. The footage was part of a news report by China Central Television (CCTV) about a combined naval exercise involving several PLA Navy vessels, as well as aviation units from the Southern Theatre Command. No information was provided about the ECM pod. A few days later, on 18 July, images emerged via the Weibo social media platform showing a PLAAF J-11A re-equipped with new identification friend-or-foe antennas under the nose and on top of the tail boom that are similar in appearance to those used to upgrade older J-10A and J-10S fighters. Already a Janes subscriber? Read the full article via the Client Login Interested in subscribing, see What we do The Power of Interconnected Intelligence