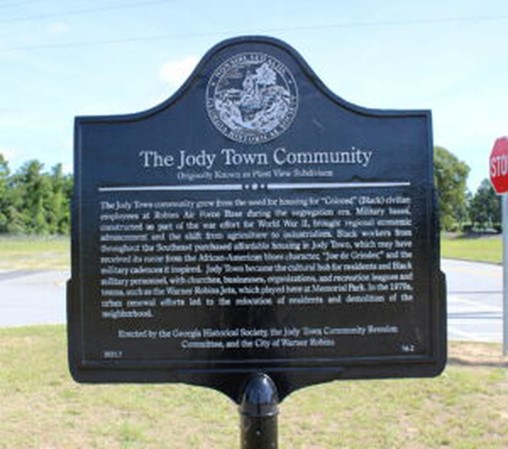 WARNER ROBINS, Ga. (AP) — A thriving Black community established in the 1940s for African American workers at Robins Air Force Base has been commemorated with a historic marker. The new plaque in Warner Robins — unveiled last month — celebrates the Jody Town Community, a segregated neighborhood that became a hub for Black life in the area before an urban renewal plan in the 1970s led to its destruction, The Telegraph newspaper reports. “Jody Town was more than a neighborhood,” Shirlyn Johnson-Granville, chair of the Jody Town Community Reunion Committee, told the newspaper. “It was a community. We had businesses. We had churches. We had organizations. We had entertainment.” Johnson-Granville recalled going to an ice cream shop in the neighborhood and learning how to sew and bake cookies with her Girl Scout troop there. The Dodgers scouted players at a park where the Warner Robins Jets baseball team played, she said. But an urban renewal project in the 1970s supported by a federal grant displaced residents and brought down buildings. The neighborhood disappeared. Johnson-Granville called the marker “a symbol of what our ancestors did in the past.” “And we hope it’ll be a symbol for hope and future generations to just know that they can be all they can be as our ancestors and elders thought for us,” she said. The marker is the latest addition to the Georgia Civil Rights Trail, an initiative led by the Georgia Historical Society that aims to commemorate key events during the Civil Rights movement. (please select a country)