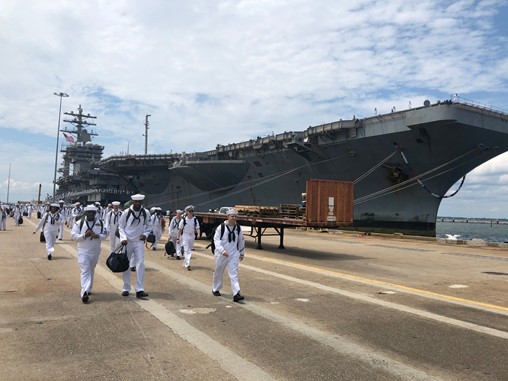 The aircraft carrier Dwight. D. Eisenhower and its 4,600 sailors returned to Norfolk Sunday after wrapping up a “double-pump” deployment. The Eisenhower carrier strike group got underway for deployment in February 2021 — after having just returned from their previous deployment in August 2020. Because of the carrier strike group’s actions and contributions during the deployment, Acting Secretary of the Navy Thomas Harker has awarded the group with the Navy Unit Commendation award. “I am most proud that we had all these reasons why we may not have been successful,” Rear Adm. Scott Robertson, Carrier Strike Group 2 commander, told reporters. Specifically, Robertson cited the double-pump deployment, COVID-19, and the six-week composite unit training exercise the strike group completed just before officially deploying. “The fact that this team just absolutely rallied and went out and truly showed their grit, their toughness and their commitment to the Navy and our nation is what I’m most proud of,” Robertson said. “And we went out and we really shined, we really demonstrated and met all of our deployment objectives really.” During the deployment, the carrier strike group operated in both the 5th and 6th Fleet’s areas of operations. Exercises the carrier strike group participated in included Exercise Lightning Handshake 21 alongside the Royal Moroccan Navy and Royal Moroccan Air Force, and Exercise Sea Shield 21 in the Black Sea that Romania hosts. (please select a country) In April, the carrier strike group transited the Suez Canal — becoming the first U.S. warships to transit the canal after the Taiwanese cargo ship Ever Given was freed from blocking the canal. Other strait and choke point transits during the deployment included the Strait of Gibraltar, Strait of Hormuz and Strait of Bab el Mandeb. Also in April, the strike group conducted dual carrier operations with the French aircraft carrier Charles de Gaulle and its strike group in the Arabian Sea. The Ike previously conducted joint operations with the French carrier in 2016 in the Mediterranean Sea to provide air support as part of Operation Inherent Resolve, and in 2020 to perform maritime operations in the Red Sea. In March, the Navy announced that embarked Carrier Air Wing 3 had started conducting flight operations against the Islamic State in support of Operation Inherent Resolve. Likewise, the Ike’s carrier strike group was responsible for providing close air support for the withdrawal of U.S. troops from Afghanistan. According to Robertson, specific air support missions included suppressing the Taliban’s ability to communicate and detonate improvised explosive devices, precision strikes, along with show of force operations. “Hearing a couple jets flying overhead, it makes you know, that, hey, there’s capability in the air,” Robertson told reporters. Altogether, Carrier Air Wing 3 racked up a total of 6,100 sorties and more than 12,400 flight hours during the course of the deployment. “It was an absolute honor and privilege for me to be able to provide overwatch for our brothers and sisters and ensure their safe return home,” Capt. Mitchell McCallister, deputy commander of Carrier Air Wing 3, told reporters. “It was especially a privilege for me. I flew my first combat sortie in 2001 over Afghanistan. So to be able to be here at the end was a pretty incredible feeling.” The aircraft carrier is now set to undergo a maintenance availability, which is currently scheduled for approximately 12 months, according to Eisenhower Commanding Officer Capt. Paul Campagna. “I don’t expect any extensions on this one,” Campagna told reporters. That’s because the sailors aboard the Ike have “done an incredible job of inspecting the ship, documenting any issues, and created a plan taking into account all the maintenance that needs to happen, he said. “They’ve had time to look at the jobs that need to get done and to integrate the schedule together and determine a really nice path that we can go through in order to get the ship out on time,” Campagna said. The Eisenhower got underway in January 2020, before the COVID-19 pandemic ravaged the world, for the first leg of the double-pump deployment. To mitigate the impact of COVID-19 on that deployment, the crew went more than 200 consecutive days at sea without a port visit. But this deployment was different. In February, the carrier strike group started vaccinating sailors, and ultimately 95 percent of the crew received the jab. That same month, the Navy announced that vaccinated sailors were authorized to participate in port calls at overseas U.S. ports. As a result, this deployment included several port visits, including one to Souda Bay, Greece, where sailors were permitted pier side. The Ike’s last double pump deployment was in 2012 and 2013. Sailors acknowledged it was a challenge this time around to get underway so soon, especially given the restriction of movement (ROM) sequester that started in December 2020, followed by the composite unit training exercise that the crew completed beforehand in January. “The major challenge is we just got off our last deployment, so we didn’t really have a lot of recoup time,” Aviation Electronics Technician 1st Class Jamice Wood told reporters. “So we had to find the will to get back up and make sure we were doing whatever our job was across the ship.” “I learned a lot about myself, I learned a lot about how to overcome challenges, I learned that mentorship is key,” Wood said. “So, even though it wasn’t my favorite thing that I’ve ever done, I think it was good. It helped me become a better sailor and a better leader for my junior guys.” The Eisenhower’s carrier strike group included the guided-missile cruisers Vella Gulf and Monterey, and guided-missile destroyers Mitscher, Mahan, Laboon and Hudner. The Vella Gulf was delayed in joining the carrier strike group on the deployment, due to technical issues. The Laboon returned to Norfolk on July 16, and the Vella Gulf is slated to arrive in Norfolk on July 23. Meanwhile, the Hudner returned to Naval Station Mayport on July 17. The Monterey, Mitscher and Mahan are continuing their deployments.