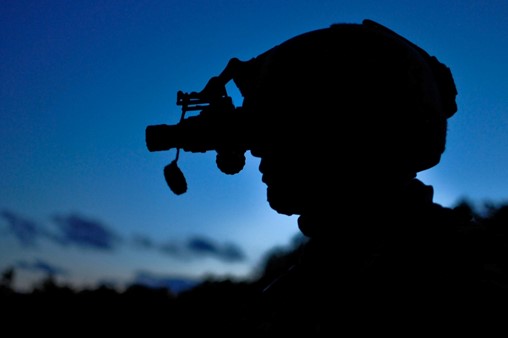 Special agents from Fort Hood’s CID detachment are investigating the potential theft of “more than 100″ missing night-vision devices, III Corps officials confirmed to Army Times. “Fort Hood is investigating missing Monocular Night Vision Devices from a maintenance facility at Fort Hood, Texas reported on July 12,” said Maj. Marion Nederhoed, a III Corps spokesperson. “Currently, the missing equipment has no immediate impact on unit readiness.” Night-vision goggles are considered extremely sensitive items throughout the military, and units will often lock down their perimeter and organize massive search parties for even one missing device. The shocking quantity of missing devices first came to light through a post by U.S. Army W.T.F. Moments, a popular Facebook page focusing on Army culture. The post included a screenshot of a text message directing the measures the unit — which Fort Hood officials did not identify — would take to search for the devices. “Yesterday ELM had 106x NVGs stolen from their secured storage facility,” said the text. ELM likely refers to the unit’s electronics communications maintenance facility, where skilled soldiers repair unserviceable electronic devices — such as night-vision equipment. Typically, night-vision devices are secured in a unit’s arms room, behind a vault door. But they may be more vulnerable to theft when at a repair facility, because not all maintenance shops are equipped with heavy vaults like those found in arms rooms. III Corps officials did not answer questions about the maintenance facility’s security, nor did they confirm which unit lost the devices. “If anyone has information related to this investigation please call the Fort Hood CID tips line at 254-287-2722,” urged Nederhoed, the III Corps spokesperson. A 3rd Special Forces Group property book officer was sentenced to more than two years in prison last year for stealing 43 obsolete night-vision devices from his unit’s Fort Bragg, North Carolina facilities and selling some of them to a military surplus store.