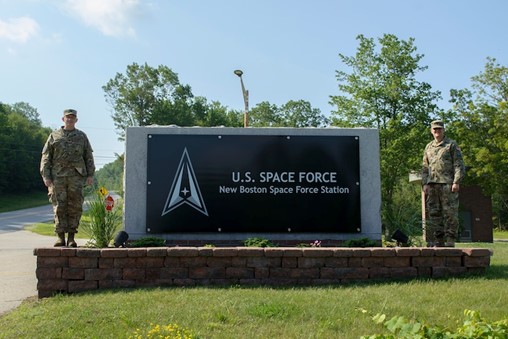 NEW BOSTON, N.H. (AP) — The switch of a satellite tracking station from the Air Force to the new Space Force is complete with a new sign. The U.S. Space Force sign was installed Monday outside the installation in New Boston, completing a transfer that was announced late last year, according to the Air Force. “The New Boston Air Force Station, home to the 23d Space Operations Squadron, has been renamed to better reflect its role in the U.S. Space Force,” base officials said on its website. “This is an exciting and historic time to be part of the space mission,” said Master Sgt. Kyle Duley, 23d Space Operations Squadron superintendent in a statement on the website. “The launch of the U.S. Space Force propels us into a new era, where the sky is no longer the limit, and New Boston Space Force Station is proud to be a part of that history and vital mission.” Col. Roy Rockwell, Space Delta 6 commander, presided over the ceremony. Officials also held a change of command ceremony, during which Air Force Lt. Col. Daniel Highlander relinquished command to Space Force Lt. Col. David Zesinger. The 23d Space Operations Squadron has been operating for more than 60 years, according to the Air Force. It is part of U.S. Space Force Delta 6 – Space Access & Cyberspace Operations, headquartered at Schriever Air Force Base, Colorado. The squadron “is part of a crucial network of sites operating 24 hours per day, providing critical satellite command and control capability to more than 190 Department of Defense, national and civilian satellites performing intelligence, weather, navigation, early-warning and communications operations,” the Air Force said. The base was originally farmland in New Boston and two adjoining towns. In World War II, the land was used as a practice bombing range by Army Air Force pilots flying out of the Manchester airport. (please select a country) In 1959, the site began transforming into a tracking station with the installation of the first of a number of radar units. In 2009, the name changed from the New Boston Satellite Tracking Station to the New Boston Air Force Station.