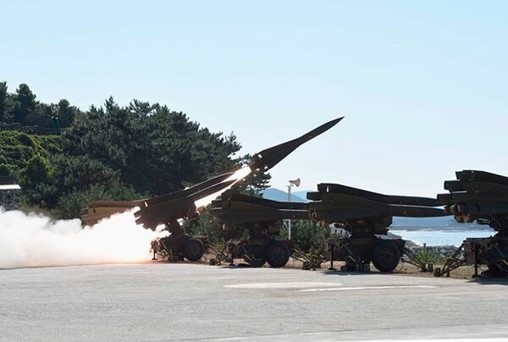 by Gabriel Dominguez & Dae Young Kim & Mark Cazalet The Republic of Korea Air Force (RoKAF) has formally retired its ageing US-made MIM-23 HAWK surface-to-air missile (SAM) systems and replaced them with locally developed Cheongung Block-1 medium-range SAM systems. The Ministry of National Defense's (MND's) Kookbang Ilbo newspaper reported on 7 July that ‘Unit 2970', a battalion-level formation under the RoKAF's 1st Air Defense Missile Brigade, retired the HAWK system, which had been in South Korean service since 1983, as well as the AN/TSQ-73 air-defence command-and-control system, which had been in service for 39 years. ‘Unit 2970' was one of the last known operators of the HAWK, with the system's automated fire-control equipment now set to be displayed in a museum, according to the paper. The latest developments come after South Korea's Defense Acquisition Program Administration (DAPA) announced in April 2020 that deliveries of Cheongung Block-1 systems to the RoKAF were completed in April 2020. The Cheongung Block-1, which was first deployed with the RoKAF's Air Defense Missile Command in 2015 in an anti-aircraft role, is armed with eight missiles per launch vehicle and has a stated maximum range of 40 km. The 4.6 m-long, vertically cold-launched missiles – each of which costs an estimated KRW1.5 billion (USD1.2 million) – are capable of reaching a top speed of Mach 4.5 and an altitude of between 15 and 20 km. A Cheongung Block-1 battery typically consists of a command-and-control centre, a multifunctional radar, and four transporter-erector-launchers (TELs) – all of which are mounted on separate 8×8 trucks. Development of the system was completed in 2011, with production of the Block-1 missiles beginning in 2013. Already a Janes subscriber? Read the full article via the Client Login Interested in subscribing, see What we do The Power of Interconnected Intelligence