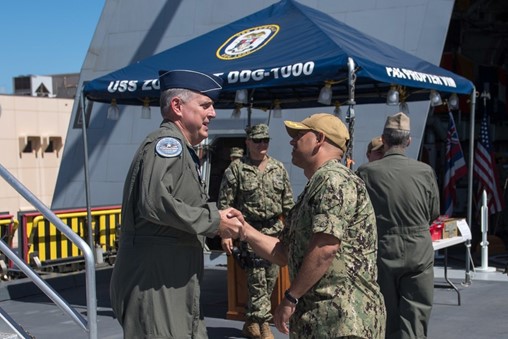 President Joe Biden has nominated the military’s No. 2 officer in the Pacific to lead the Air Force’s tanker and transport branch, the service confirmed Thursday. If approved by the Senate, Lt. Gen. Mike Minihan, deputy commander of U.S. Indo-Pacific Command, would earn a promotion to four-star general and replace current Air Mobility Command boss Gen. Jacqueline Van Ovost. Minihan has spent much of the past 15 years rotating through several operational roles in the airlift and INDOPACOM communities, including serving as the command’s chief of staff and deputy operations director as well as roles at U.S. Forces Korea and Pacific Air Forces. He commanded the 89th Airlift Wing at Joint Base Andrews, Maryland, which includes Air Force One and the fleet of VIP transport jets, and the 19th Airlift Wing at Little Rock Air Force Base, Arkansas, which supports the largest C-130 Hercules fleet in the world. The three-star pilot has logged more than 3,400 hours in mobility airframes like the C-130 transport plane, KC-10 tanker and C-32 executive travel aircraft. AMC manages about 1,100 aircraft and 107,000 military and civilian employees in total. Minihan’s experience in Asia and the South Pacific will shape AMC’s approach as that region emerges as the military’s new top priority — dominated by concerns of competition and conflict with China. He would likewise take over the command as it welcomes the troubled KC-46 Pegasus tanker, eyes retirement for its older airframes and considers the threats that large, slow aircraft could face in the future. AMC is also poised to play an important role in the Air Force’s new plan for distributed communications, with tankers as makeshift data hubs on the battlefield. The command recently ramped up its support to the Middle East to help pull U.S. troops and materiel out of Afghanistan. Military-owned C-17 and C-5 cargo planes and commercial transport firms are assisting with that effort, and KC-10 and KC-135 tanker jets are on hand to refuel aircraft in the area as needed. Van Ovost — currently the military’s only female four-star officer — is herself awaiting Senate confirmation to run U.S. Transportation Command. She has led AMC since August 2020. The New York Times reported in February that Pentagon leaders had delayed their recommendation to nominate Van Ovost to lead TRANSCOM until after the 2020 presidential election, believing that Biden would be more receptive to a female combatant command boss than former President Donald Trump. Her nomination went to the Senate in March; she is expected to take over at TRANSCOM within the next few months.