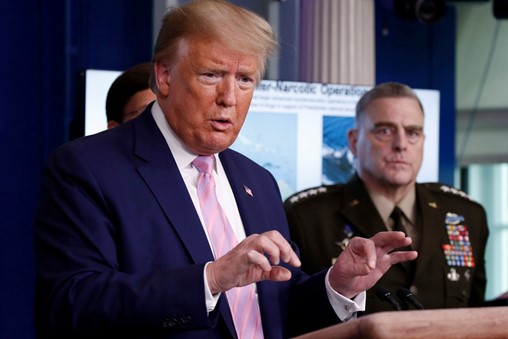 The Pentagon’s most senior officer feared President Donald Trump would attempt a coup earlier this year, according to excerpts released Wednesday from a forthcoming book. Army Gen. Mark Milley, chairman of the Joint Chiefs of Staff, told his staff that he would take steps to block Trump from using the military to enforce his rejection of the 2020 election results. “They may try, but they’re not going to fucking succeed,” Milley said, according to the authors of “I Alone Can Fix It,” which chronicles the final year of the administration. “You can’t do this without the military. You can’t do this without the CIA and the FBI. We’re the guys with the guns.” Milley and the Joint Chiefs discussed resigning one by one if they were ordered to participate in said coup, according to authors Philip Rucker and Carol Leonnig, White House reporters for the Washington Post. The president’s top military adviser compared his predicament to a “Reichstag moment,” where Trump was comparable to Adolf Hitler after he took office in 1933: “The classic authoritarian leader with nothing to lose,” they wrote. He also compared the November Million MAGA March on D.C., after officials called the election for Joe Biden, to the German “Brownshirts” militia, the paramilitary wing of the Nazi party. A spokesman for Milley declined to comment about the statements in the book attributed to the chairman. In his way, however, Milley has dropped hints that he was concerned about the direction the country began to head last summer, though he stopped short of publicly denouncing Trump. (please select a country) Following the president’s fated walk across Lafayette Square on June 1, 2020, Milley apologized for following along with the stunt, in a pre-recorded commencement speech to the National Defense University. “As many of you saw the results of the photograph of me in Lafayette Square last week, that sparked a national debate about the role of the military in civil society,” said Milley, whose Army combat uniform, which is what he wears most days, alarmed many who saw the photos and footage. “I should not have been there. My presence in that moment, and in that environment, created the perception of the military involved in domestic politics.” Then-Defense Secretary Mark Esper had been on his way to FBI headquarters with Milley when they got a call from the White House to stop by, Esper told reporters. He later told Military Times that he believed they were going to look at riot damage inside St. John’s Episcopal Church. While his appearances were limited in 2020, Milley made sure to work his treatise on the Constitution and the oath of office/enlistment into multiple speeches last year. “We are unique among armies, we are unique among militaries. We do not take an oath to a king or queen, or tyrant or dictator, we do not take an oath to an individual. No, we do not take an oath to a country, a tribe or a religion,” he said during a Veterans Day address at Fort Belvoir, Virginia. And in the days following the Jan. 6 attack on the Capitol, Milley and the Joint Chiefs issued a letter to the force, clarifying that Joe Biden would be inaugurated on Jan. 20, and that what had happened at the Capitol was strongly condemned by the military’s most senior leaders. “As Service Members, we must embody the values and ideals of the Nation. We support and defend the Constitution,” they wrote. “Any act to disrupt the Constitutional process is not only against our traditions, values, and oath; it is against the law.” After book reviews went live Wednesday night, online reactions tended toward questions of why Milley or the other service chiefs didn’t say anything at the time. Had they, they surely would have been swiftly fired, which could have precluded their ability to do anything behind the scenes, even if it just meant advising the president against certain actions. Esper offered some insight into his own thinking, speaking to Military Times less than a week before Trump fired him. Following the Lafayette Square incident, some wondered whether Esper would resign. “At the end of the day, it’s as I said — you’ve got to pick your fights,” he said. “I could have a fight over anything, and I could make it a big fight, and I could live with that — why? Who’s going to come in behind me? It’s going to be a real ‘yes man.’ And then God help us.”