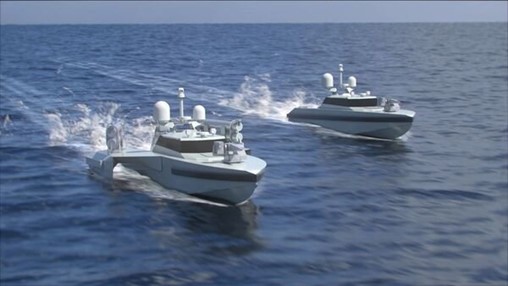 by Cem Devrim Yaylali Turkish shipbuilder Sefine Shipyard and defence electronics company Aselsan have launched a new multirole unmanned surface vehicle (USV) project, the companies jointly announced on 9 July during a steel-cutting ceremony to mark its start. It is understood that two USV prototypes – comprising an anti-surface warfare (ASuW) and an anti-submarine warfare (ASW) variant – are under construction, with block assembly under way for the former and first steel cut for the latter. Sefine Shipyard will lead USV construction, while Aselsan will contribute its expertise in autonomous systems, communication, electro-optical sensors, and remote-controlled weapon stations (RCWSs). Both variants are expected to offer a maximum range and endurance of 600 n miles and 80 hours respectively, and attain sprint speeds of over 36 kt. These will also be designed to operate in conditions of up to Sea State 4. The companies revealed few details of the two USVs but indicated that they will be 15 m long and will be air-transportable by Airbus A400M Atlas transport aircraft, suggesting that the overall width of the USVs will not exceed 4 m to fit within the cargo hold of the A400M. The displacement of the USVs will also not exceed 37 tonnes, given the aircraft's maximum payload capacity. Besides being airlifted, the vehicles can also be transported via road or aboard the DİMDEG fleet replenishment ship built by Sefine Shipyard. Already a Janes subscriber? Read the full article via the Client Login Interested in subscribing, see What we do The Power of Interconnected Intelligence