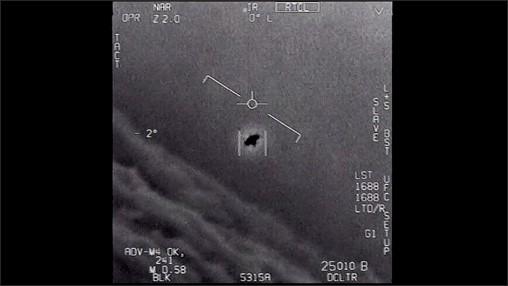 UFOs have been in the news a lot lately. I am a research astronomer who has written and edited books and created a free online course about the search for life in the universe. While I think we are making progress on detecting life beyond Earth, I view UFOs from a skeptical standpoint, since the evidence that they represent aliens visiting the Earth is unconvincing. Last month, a report from the Office of the Director on National Intelligence dropped on Congress. It described 144 sightings by military personnel over a 17-year period, preferring to use the term UAP, for unidentified aerial phenomenon, in part to avoid the stigma attached to UFOs. For those like me waiting for definitive statements, the report was a big disappointment. It declined to draw any conclusions, saying the available data is “largely inconclusive” and noting it is limited and inconsistently reported. The report worried about increased air “clutter,” and left open the possibility that some UAP sightings represent advanced technologies of foreign adversaries, with significant national security implications. As for UFOs as alien spacecraft, the report was agnostic. It scrupulously avoided using the words alien or extraterrestrial. That will do little to discourage “true believers.” Nearly half of all Americans think aliens are visiting the Earth, and the UFO phenomenon has become enmeshed in a web of conspiracy theories that include accounts of abduction by aliens and crop circles. These conspiracy theories have undoubtedly been fueled in part by the fact that the military has been secretly investigating UFOs for decades. Any rational debate over UFOs must contend with the fact that they have taken deep root in the public consciousness. Will the report, and increased transparency by the military, change anything? Will it help draw scientists like me into a serious study of the phenomenon? Scientists will have to get over their reticence to engage with the sightings. We are in an awkward position. Rapid progress in finding planets orbiting other stars has led to a projection of 300 million habitable planets in our galaxy. There has been plenty of time for life on some of those planets to evolve intelligence and technology. We don’t deny the possibility of aliens traveling from their star system to ours. We are just unconvinced by the data presented so far. Most sightings can be attributed to weather balloons or astronomical phenomena such as meteors, fireballs, and Venus. There are many resources giving mundane explanations for UFO sightings. There have been academic studies of UFOs before. In 1968, the Condon Report said that that no scientific knowledge had been gained from two decades of study of the phenomenon. But 20 years later, a review led by Stanford professor Peter Sturrock concluded that some sightings are accompanied by physical evidence that warrants investigation. It is telling that after decades of studies and hundreds of thousands of sightings, UFOs have not reached the gold standard in science for confirming any hypothesis: reproducible evidence. For their part, the military and intelligence communities will have to more actively engage with scientists, and ask for their help and expertise in understanding the sightings in the report, and many others that have not been made public. There are signs that this might happen. Under Avril Haynes, the Office of the DNI has been drawing on its expert group of 500 scientists who consult with the intelligence agencies on scientific problems. A model for this type of collaboration is the two panels of scientists and medical experts that were recently set up to understand the “Havana syndrome” that has afflicted American diplomats since 2016. What would a collaboration with scientists look like, and what kind of data would it take to “move the needle” on understanding the UAP phenomenon? The recent report shows how difficult it is to interpret the sightings, even with expert observers and data from multiple sensors. In all but one of 144 cases, there was too little information to even broadly characterize the event. Deputy Defense Secretary Kathleen Hicks acknowledged this deficiency when she called for more timely and consistent data collection on UAPs. The Defense Department has just over two months to develop a new strategy and report back to Congress. Sensors malfunction and even expert observers can be fooled when seeing something outside their realm of experience. With optical and infrared imaging, it is extremely difficult to gauge the distance, size, and speed of an object. For example, the three Navy videos that have been in heavy circulation on the Internet seem impressive and inexplicable, but they could easily be artifacts of camera optics and tracking systems. The military should invite a select group of experts to examine all the evidence (with suitable clearance given when the sensor technology involved is classified). It should be an interdisciplinary team, comprised to address all the observational characteristics of the phenomena. Ideally, data should be shared among our allies, since UAP appear globally. Scientists can bring their assets to bear on the problem as well. For example, civilian satellites are being used to detect and monitor UAPs and machine learning can be used to sift the data for anomalous events. Scientists are curious and they love a challenging problem. I would lend my hand to the effort if asked. Let’s hope the government will harness scientific expertise to shine light on this decades-long mystery. Chris Impey is a professor of astronomy at the University of Arizona. He is the author of hundreds of research papers on observational cosmology and education, and he has written popular books on black holes, the future of space travel, teaching cosmology to Buddhist monks, how the universe began, and how the universe will end. His massive open online courses have enrolled over 300,000 people. Editor’s note: This is an Op-Ed and as such, the opinions expressed are those of the author. If you would like to respond, or have an editorial of your own you would like to submit, please contact Military Times senior managing editor Howard Altman, haltman@militarytimes.com.