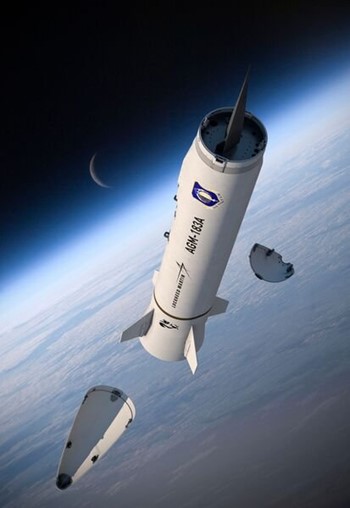 The US Air Force (USAF) 780th Test Squadron, based at Eglin Air Force Base (AFB), Florida has successfully conducted the first arena test of the warhead intended to equip the Lockheed Martin AGM-183A Air-Launched Rapid Response Weapon (ARRW) prototype conventional hypersonic glide weapon system. The AGM-183A ARRW is a rapid prototyping middle-tier acquisition (MTA) programme for the USAF that leverages performance data from the separate Defense Advanced Research Projects Agency (DARPA)/USAF Tactical Boost Glide (TBG) programme. The ARRW programme plans to develop an operational prototype, with a solid-fuel booster and conventional ordnance package, which will be carried on the B-52H strategic bomber. The USAF's Global Strike Command is also evaluating integration of the AGM-183A on the external weapons stores of the B-1 Lancer strategic bomber. Intended to collect lethality data on developmental AGM-183A weapon, the detonation test was designed and conducted “to ensure the customer's data requirements were met using new and improved test tools, technologies, and techniques”, according to a USAF statement released on 7 July. “The unique nature and shape of the warhead required a lot of firsts for everyone involved,” said 780th Test Squadron's David Spiker, who managed the test. “Some of the firsts were the new and unorthodox design and construction of the test arena, the test procedures and equipment, the warhead's fragmentation data collecting, and the post-test data processing to ensure the warhead's effects have been accurately characterised,” the USAF said. The air force did not disclose where or when the test was conducted. Further tests are expected this year. The prototype warhead arena test announcement marks another milestone in the accelerated development of the AGM-183A ARRW programme, and precedes an anticipated second booster vehicle flight test attempt for the weapon system later this month. Already a Janes subscriber? Read the full article via the Client Login Interested in subscribing, see What we do The Power of Interconnected Intelligence