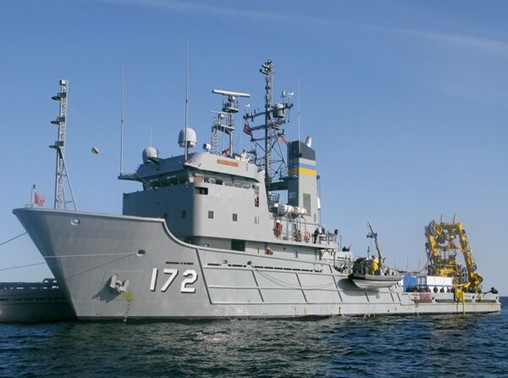 The US Navy (USN) plans to change shipbuilder for its new Navajo-class towing, salvage, and rescue ship (T-ATS) after Gulf Island Shipyards has completed the first five of the eight planned vessels. Instead of exercising the final three ship options with the Houma, Louisiana yard, which was acquired by Bollinger Shipyards in April, the service is instead pursuing a sole-source award with Austal USA in Mobile, Alabama. Established as a specialist in aluminium shipbuilding, Austal was not one of the five original bidders for the T-ATS contract but is now in the process of building up a steel shipbuilding capability at its Mobile shipyard. The Navajo class will provide the USN with ocean-going tug, salvage and rescue capabilities to support fleet operations, replacing the three Powhatan-class (T-ATF 166) and two Safeguard-class (T-ARS 50) ships now coming to the end of their lives. Following an open competition, Gulf Island Shipyards was awarded a USD63.5 million contract by the US Naval Sea Systems Command (NAVSEA) in March 2018 for the detail design and construction of the first T-ATS vessel, USNS Navajo (T-ATS 6). The contract included options for seven additional vessels. Options for an additional four ships – USNS Cherokee Nation (T-ATS 7) and USNS Saginaw Ojibwe Anishinabek (T-ATS 8), USNS Lenni Lenape (T-ATS 9) and USNS Muscogee Creek Nation (T-ATS 10) – have subsequently been exercised with Gulf Island Shipyards. Already a Janes subscriber? Read the full article via the Client Login Interested in subscribing, see What we do The Power of Interconnected Intelligence