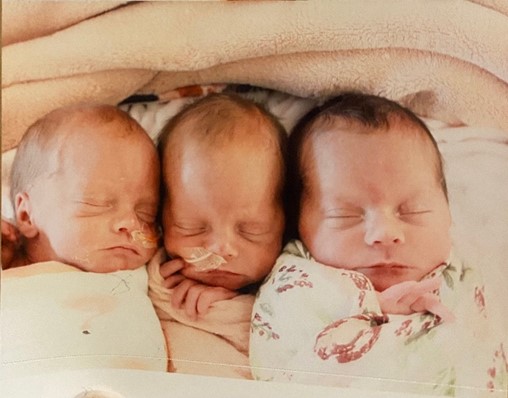 Signing up to serve your country is viewed by most as brave and patriotic. However, one Air Force family has really upped the ante by bringing three babies into the world on Independence Day. Stick a feather in my cap and call me macaroni. Three babies at once? Talk about overachieving. Capt. Matthew Smith and his wife Jessica officially welcomed Olivia, Isla and Amelia into the world on July 4, 2021. Oh, and that was after the couple was initially told “we were having twins,” Smith told Military Times. “Then, at our 10-week appointment, after two weeks of digesting the news that we were having twins, we found out there were actually three babies in there and not two! Triplets?!” It turns out that the odds of conceiving triplets are roughly one in 10,000. And while the original due date was Sept. 2, every additional child in the pregnancy shaves about four weeks off, bringing them to July. “When Jess arrived at her 31-week appointment on July 1, the doc decided to admit her on a precautionary basis and just wait until the following Thursday to deliver the triplets,” Smith added. “It was good that he made the decision to admit her earlier, because while he was doing his rounds on the morning of July 4, there were enough signs there for him to say, ‘Jess is ready for delivery,’ and to prep the delivery room, because they’re coming out in a couple hours.” When they were born, Olivia, Isla, and Amelia weighed 3.4 pounds, 2.12 pounds and 3.11 pounds, respectively. “The delivery room was packed because each kiddo had a separate team designated to them,” Smith said. “The triplets are all in stable condition and mom is good to go as well.” (please select a country) The trio are expected to be in the NICU for the next six to eight weeks, but Smith said that they’re all showing signs of progress and stability ten days out. The couple also has an older daughter, Emma, who is four. “The news of 3 more kiddos was a lot for both of us to take in, but we’ve had some time to digest it and it’ll be a great experience.” Observation Post articles reflect author observations. Any resemblance to news may be purely coincidental.