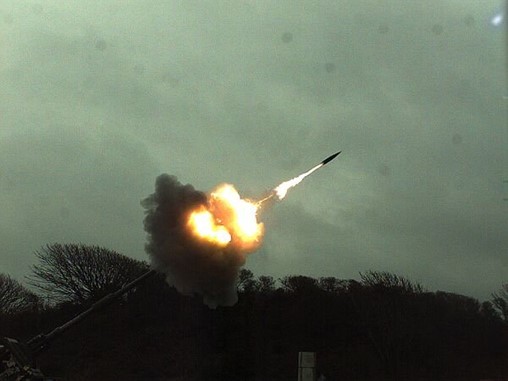 by Christopher F Foss BAE Systems has revealed to Janes that it conducted its first demonstration of its new 155 mm extended range (ER) high-explosive (HE) artillery projectile, which was developed using some UK Ministry of Defence (MoD) funding and some internal funding. The demonstrations occurred in late 2020 but were not revealed until now. The trials were carried at the QinetiQ Eskmeals artillery proving range in the northern United Kingdom with a BAE Systems AS90 155 mm/39 calibre self-propelled (SP) artillery system and a 155 mm/52 calibre firing stand to show compatibility with the UK MoD's forthcoming Mobile Fires Platform (MFP) acquisition programme. BAE systems said that, when fired from the AS90's 155 mm/39 calibre ordnance, the 155 mm ER HE projectile has a range greater than 30,000 m, which would provide a step change in capability over the currently deployed 155 mm L15A4 HE projectile. The company added that, when fired from the 155 mm/52 calibre range stand, the projectile proved a maximum range beyond 40 km. The new 155 mm ER HE has a payload of about 10 kg and achieves the increase in range via a base bleed (BB) unit that was designed and manufactured at the company's Glascoed facility. The 155 mm ER HE trial was done using a European in-service modular charge system (MCS). Demonstration and firing trials of the 155 mm ER HE were completed in 2020, and in November 2020 the company was awarded a contract under the UK's existing ammunition contract, “a tasking to qualify the 155 ER HE projectile in the UK service environment. This programme started in 2020”, a company spokesperson told Janes . Already a Janes subscriber? Read the full article via the Client Login Interested in subscribing, see What we do The Power of Interconnected Intelligence