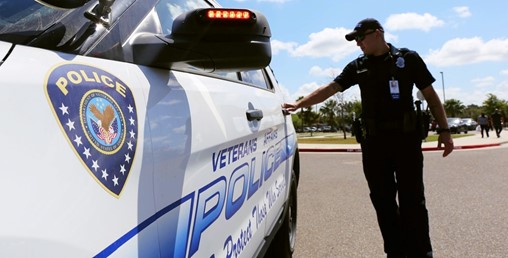 Lawmakers want Veteran Affairs leaders to provide department police officers with more suicide prevention training, body cameras for enhanced visitor safety, and easier communication with other VA staff. But first, they need to figure out who is in charge of the law enforcement force. “I know the department recognizes that we must continue reforming and modernizing VA police. However, it still has a confusing leadership structure, causing many to wonder who’s in charge,” said Rep. Chris Pappas, D-N.H., chairman of the House Veterans’ Affairs Committee’s panel on oversight, during a hearing on VA police Tuesday. Today, the VA Police Service employs about 4,000 officers and support personnel, charged with securing more than 170 department medical sites. The average tenure of an officer is about 12 years, according to department records. Three years ago, the department’s inspector general office released a review of the department’s police force which found “VA did not have adequate and coordinated governance over its police program.” A similar review conducted in 2020 found that despite promised reforms, the force was still best by “the splintering of governance responsibilities, confusion about roles, and lack of clear guidance, which undermine VA’s well-intentioned goals and objectives.” VA officials said they have made improvements to training and record keeping of on use of force incidents in recent years. Lewis Ratchford Jr., VA’s Chief Security Officer, also said all officers now undergo monthly suicide prevention, personal safety and crisis intervention training. But he acknowledged during the hearing Tuesday that even after additional chain of command changes in recent years, the force’s leadership structure is confusing. Policy issues are handled by VA’s human resources offices while operational issues are split between Veterans Health Administration officials and local hospital leaders. “And ultimately, the person responsible for the VA police is the secretary of the department,” he said. Lawmakers said that divided command structure has led to slow implementation of other proposed reforms. In the last 12 months, VA police officials have implemented just two of seven recommendations from the Inspector General’s office to simplify command structure and information technology infrastructure. The office said more work needs to be done there as soon as possible. “An effective governance structure is critically important to the functioning of any program, but imperative where there are issues of public and patient safety,” said Leigh Ann Searight, deputy assistant VA Inspector General. “The confusion about program roles and authority has made it difficult for VA to have any degree of certainty that its police personnel and resources are being effectively deployed.” Department leaders are expected to offer an update on additional progress by the end of this month. Rutherford said improvements to staffing models, use of force tracking and training improvements are expected in coming months. “Our objective is to give our nation’s veterans the high-quality care they have earned and deserve while keeping them safe within our facilities,” he said. Committee members promised more oversight on the issue in coming months. “These [police] are good people and I support the efforts of the department, but progress has been slow,” said Rep. Jack Bergman, R-Mich. “I want to see the roles and responsibilities of each office clearly defined, so that police officers from a recruit to a senior chief can clearly identify and navigate these chains of command.”