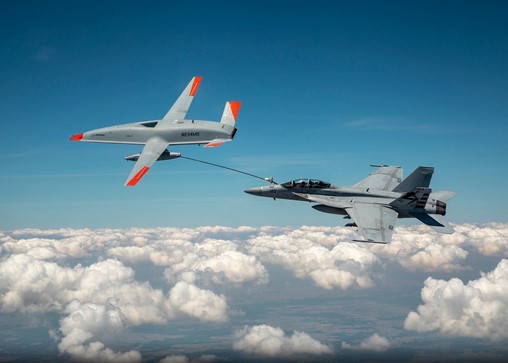 The Navy is poised to start selecting sailors and civilians this summer to become warrant officers and operate the MQ-25 Stingray carrier-based refueling drone. The Navy announced in December it was creating the new aerial vehicle operator warrant officer community for the Stingray, and the service is slated to hold its first selection board for the specialty Aug. 2, according to a new administrative message. “AVOs will start out operating the MQ-25 Stingray, the Navy’s first carrier-based unmanned aerial vehicle, which is expected to join the fleet with an initial operating capability in 2024,” said Capt. Christopher Wood, aviation officer community manager at the Bureau of Naval Personnel, in a December 2020 news release. Over the course of the next six to 10 years, the Navy aims to expand the specialty to 450 warrant officers, in grades W-1 through W-5, according to the service. Applications are open for enlisted sailors and “street-to-fleet” warrants, who will go on to Officer Candidate School in Newport, Rhode Island, if selected. They will also head on to basic flight training to receive their “wings of gold,” receive the AVO designator, and complete advanced training on the MQ-25 aircraft. Those interested have until July 26 to submit their applications. The Navy said in December that warrant officers were ideal for the specialty since they are expected to advance as technical specialists during repetitive assignments. “Unlike traditional Navy Chief Warrant Officers, the majority of these officers will be accessed much younger and trained along the lines of current Naval Aviators and Naval Flight Officers in the unrestricted designators,” Wood said. “However, Naval Aviators and Naval Flight Officers require assignments that progress in tactical and leadership scope to be competitive for promotion, while warrant officer AVO’s will be technical specialists and spend their careers as operators,” Wood said. Eventually, the Navy may have these warrant officers trained to operate other Navy unmanned aerial vehicles, such as the MQ-4C Triton. The Navy awarded an $805 million contract in 2018 for the design, development, fabrication, test and delivery of four MQ-25 aircraft. The contract was modified in 2020 to accommodate three additional aircraft, which are scheduled for delivery by 2024 and operational capability by 2025. Last month, Boeing announced that the Navy and Boeing had successfully completed an air-to-air refueling exercise with an MQ-25 and a Navy F/A-18 Super Hornet. According to Boeing, the exercise marks the first time an unmanned aircraft has refueled another aircraft. “This team of professionals was integral in the successful flight,” Rear Adm. Brian Corey, the Navy’s program executive officer for unmanned aviation and strike weapons, said in a Boeing news release. “Over the next few years, we will work side-by-side with Boeing to deliver this capability that will greatly enhance the future carrier air wing.”