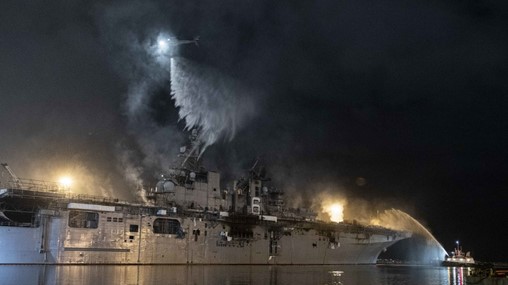 While the U.S. Navy has remained mum regarding what caused a devastating multi-day fire aboard the amphibious assault ship Bonhomme Richard in San Diego a year ago, the question of whether anyone will be criminally charged for the disaster has remained at the forefront. Naval Criminal Investigative Service spokesman Jeff Houston told Navy Times late last month that no charges have been filed to date. But at one point in November, a Navy prosecutor from a San Diego-based legal office was involved in discussions of evidence preservation aboard the ship, according to San Diego Fire-Rescue Department emails recently obtained by Navy Times. Mention of a “trial counsel,” or prosecutor, in one email raises questions about whether the sea service was at some point planning to, or actually did, charge someone in connection to the fire, before backing off for reasons that have not been made public. On Nov. 25, an email from a Navy official who signed the message “XO,” short for executive officer — a unit’s second-in-command — noted that there was “a request to preserve some evidence in the Lower V,” a reference to the ship’s aft section. “Trial counsel has asked that we not access, clean up, etc., the Lower V until that request has been adjudicated and/or the evidence has been collected,” the XO’s email states. The emails, first reported on by the Times of San Diego news site, showcase the back and forth between Navy officials and fire department leadership following the Bonhomme Richard blaze, which started on July 12, 2020, burned for more than four days and has since led the ship to an early retirement on the scrap heap. Municipal firefighters joined sailors from across the waterfront in battling the blaze. Lt. Cmdr. Arlo Abrahamson, a Navy spokesman, confirmed this week that the trial counsel reference in the XO email referred to a Navy prosecutor. Abrahamson declined further comment on the email, citing the ongoing investigation. While several probes of the fire remain underway, a command investigation is expected to be completed and released this summer, according to U.S. Pacific Fleet officials. Whether the email mentioning trial counsel was sent from Bonhomme Richard’s XO, or another executive officer, remains unclear. Citing an anonymous senior defense official, the Associated Press reported on Aug. 26, 2020, that arson was a suspected cause of the fire, and that a sailor was being questioned. A week before that AP report, on Aug. 19, an official whose name is redacted in the released emails cancelled a meeting with fire department personnel due to “new developments in the BHR criminal investigation.” It remains unclear what those new developments might have been. Technically, the term “trial counsel” comes into effect when someone is charged and a court is convened. The naming of a trial counsel would be included in a convening order for that case, according to Lawrence Brennan, a retired Navy captain and attorney who now teaches at Fordham University’s School of Law. Brennan added that the only other reason he could see for there being trial counsel involved was “if an accused was placed in pre-trial confinement and a hearing before a military magistrate required the presence of counsel for both the government and defense.” But to date, Navy officials say no one has been charged in connection to the fire. If the Navy does decide to charge anyone from here on out, the case will be made more difficult due to the fact that the ship has since departed for a Gulf of Mexico scrapheap, and any defense team would have the right to inspect the burnt hull, Brennan said. “The evidence is disappearing because the ship is being scrapped, and there was a lot of public interest and pressure to get this resolved,” he said. “It’s a multi-billion dollar loss.” A rash of ship fires in San Diego The emails also reveal that the San Diego-based surface fleet suffered at least three ship fires in the roughly 15 months leading up to the Bonhomme Richard blaze. On March 2, 2019, a fire broke out aboard the amphibious assault ship Boxer in the ship’s forward starboard mooring station, causing structural and electrical damage, while it was dockside at Naval Base San Diego, according to the Naval Safety Center and emails from Navy investigators to the San Diego fire department. That fire was classified as a “Class B” mishap, which involves damage ranging from $600,000 to $2.5 million. Later that year, on Nov. 29, 2019, a “Class A” fire caused extensive damage to the main machinery room aboard the mine countermeasures ship Champion as it sat dockside aboard Naval Base San Diego. Class A mishaps are the most severe mishap classification and involve at least $2.5 million in damage. And on March 28, 2020, a “Class B” fire aboard the dock landing ship Harpers Ferry caused “substantial damage to the (commanding officer’s) cabin and associated equipment” while the ship was in the yard there, according to the Safety Center. Navy investigators brought up those fires in emails, asking whether San Diego fire crews had responded to any of them. The emails reveal that the Navy and the city had no mutual aid agreement in place for such fires at the time of the Bonhomme Richard blaze. San Diego fire department spokeswoman Mónica Muñoz said in an email to Navy Times this week that while the mutual aid agreement was expired at the time, that did not prevent municipal firefighters from assisting, and that a new agreement is being negotiated. At least 18 city firefighters filed workers compensation claims following the blaze, with eight filing for concussions, four for orthopedic issues and the rest for dehydration or smoke inhalation, according to one fire department email sent to Navy investigators.