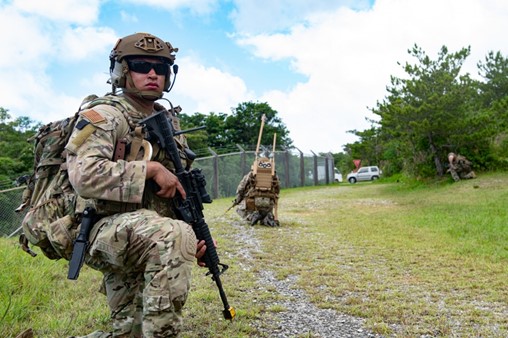 The Air Force is wooing enlisted airmen and guardians in nearly 40 career fields to stay in the service with as much as $360,000 in bonus pay. A midyear list of Air Force and Space Force high-priority enlisted jobs that can snag some extra cash, released Wednesday, includes specialties from Chinese and Russian language analysts to aircraft maintainers to health care workers. The service offers bonuses to active-duty airmen who reenlist for jobs with a dwindling workforce or those where people are particularly expensive to replace and retrain. Airmen can sign up for as many as four additional years at a time, and have to stay in the Air Force for the entire duration of their reenlistment to get the bonus. Early-career special tactics and explosive ordnance disposal airmen are in the highest demand. Airmen in those highly trained fields who have been in the service for fewer than six years can earn five times their monthly base pay. People are eligible for up to $100,000 in each of four periods of time over the course of their careers: when they have served between 17 months and six years; six to 10 years; 10 to 14 years; and 18 to 20 years. Total career bonus pay is capped at $360,000. Bonuses are tallied by multiplying one month’s base pay by the number of years an airman chooses to reenlist, and multiplied again as much as fivefold depending on how urgent a career’s staffing needs are. In March, the Air Force similarly offered bomber, fighter, mobility, special operations and fixed-wing combat search-and-rescue pilots up to $420,000 in bonuses over as many as 12 years if they renew their commitment in 2021. The midyear list has nearly the same number of eligible fields as those that were released at the beginning of 2021 — 39 jobs to 37— but dropped certain careers like sensor operators and Korean language analysts. It’s still a far cry from the 2020 list of 72 specialties, or the 2016 list of 117 jobs. The Air Force recently slashed the number of bonus-eligible fields because more people are opting to stay in the service than at nearly any other time in the past 20 years —due in part to the coronavirus pandemic. “Overall retention levels are at record highs and manning within many of our career fields is healthy,” Lt. Gen. Brian Kelly, Air Force deputy chief of staff for manpower, personnel and services, said in December. “This reduces our requirement and opportunity to utilize retention bonuses to the same extent.”