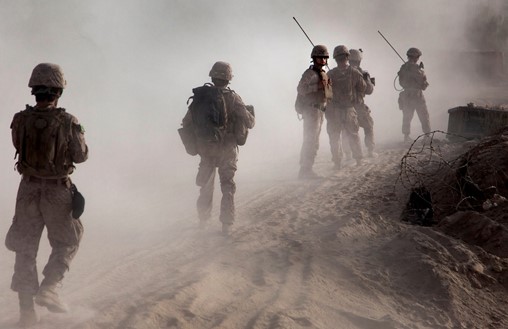 On October 14, 2010, Marines from 3rd Battalion, 5th Marine Regiment were conducting clearing operations in Sangin, Afghanistan, when embedded Taliban forces ambushed the unit’s first squad. One of the squad’s machine gunners, Lance Cpl. Irvin M. Ceniceros, sustained a life-threatening sucking chest wound in the ambush. Despite the grievous injury, Ceniceros continued to fight, sending rounds down range while the other Marines advanced to safety. As his fellow Marines tried to bring him to safety, Ceniceros remained on the trigger. And while he succeeded in saving numerous lives, the 21-year-old would eventually succumb to his wounds. The son of Mexican immigrants who came to the U.S. in 1985, Ceniceros was beloved by his fellow Marines for his willingness to serve his country and his brothers. Eleven years later, Marines from the Ronin 3 platoon met to honor the Silver Star recipient during a filmed reunion that is forming the basis of a forthcoming documentary. CHRONICLING UNTOLD STORIES Jeanne McKinney, who filmed and co-produced the documentary alongside her husband Dave, told Military Times she wanted to document Ronin 3′s story because of the lack of attention this era of fighting in Afghanistan has gotten. “The fight over there needs to be chronicled just like any war,” McKinney said. “It was just an incredible time of bravery, of courage.” This particular documentary was made possible because of Ceniceros and his legacy, McKinney added. In a short tribute video released on YouTube — and recently screened to graduating recruits — those who served alongside Ceniceros discuss fond memories of the Arkansan. But the fallen lance corporal’s story is not the only one featured in the film. As she progressed through each interview with Darkhorse Marines, McKinney realized just how many accounts from Sangin remain untold. “We’re going to get to hear stories that we would never hear,” McKinney said. “They [3/5 Marines] were put together as a team to do a nearly impossible mission.” Many of those Marines sustained significant injuries along the way, yet remained in the fight. “These guys have a family — brotherly love that’s really hard to put words to,” said McKinney. Today, a handful of the Marines from that harrowing campaign remain on active-duty. And while others have since retired, McKinney says the unit has remained in contact, supporting one another in the wake of the trauma of war. One such Marine is 1st Sgt. Dan Robert, who was chosen in 2017 as the Military Times Marine of the Year. HALTED PRODUCTION The first production meeting for the film was in early March 2020, days before the coronavirus pandemic ground everything to a halt. To continue working amid restrictions implemented in the wake of pandemic lockdowns, the filmmakers opted to shoot outdoors. With the support of the Marine Corps, the crew was able to set up filming locations at Camp Pendleton and in Bridgeport, California. Wind and other weather conditions made outdoor filming difficult at times, McKinney said, but in the end, filming on base allowed the Marines to return to the site of where they were trained. As word about the documentary has spread, more Marines have come forward, asking to participate and share stories. McKinney said the number of Marines involved since beginning the project has grown from five to more than 20. “We’re going to get into the hearts and minds of the combat warriors that served in Sangin in 2010 in a whole new light,” McKinney said, adding that she hopes the documentary will allow both civilians and Marines to connect with those who endured combat in Sangin. McKinney and her team plan to have the documentary finished by the end of 2021, with the hope of streaming options available shortly after.