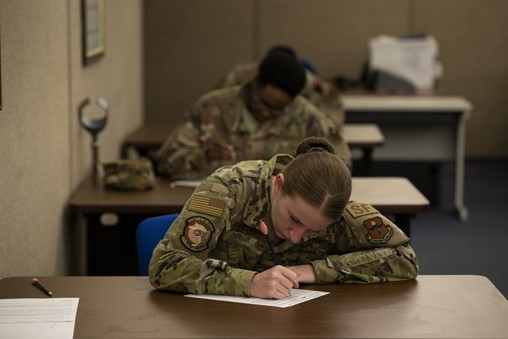 The Air Force is building a plan to move promotion tests for enlisted airmen online, a change in the works after the service recently lost dozens of completed paper exams en route to Texas. “It’s 2021, and the fact that we’re not electronic testing, I think, makes all of us as senior leaders absolutely crazy,” Lt. Gen. Brian Kelly, deputy chief of staff for manpower, personnel and services, said during a June 28 Facebook town hall. A mail carrier that contracts with the Air Force to move promotion tests across the country misplaced the finished answer sheets of 68 airmen from Joint Base Andrews, Maryland, and 18 airmen at Luke AFB, Arizona, while bringing them to the Air Force Personnel Center at Joint Base San Antonio-Randolph, Texas, AFPC spokesperson Mike Dickerson confirmed July 7. That took nearly 90 airmen out of the running for a promotion to technical sergeant. More than 9,400 of nearly 35,000 eligible people made the cut last month. “The installation test control office processed the answer sheets and gave them to the installation mail center for delivery to AFPC, consistent with Department of Air Force procedures,” Dickerson said of Joint Base Andrews. “At both installations, the servicing carrier is currently unable to determine the location of the package containing answer sheets.” All affected airmen know about the mistake, and the Air Force is investigating the fluke, Dickerson added. He declined to answer what company was carrying the tests. Airmen whose exams were lost will get the chance to retest and be considered for a promotion outside of the regular cycle, Dickerson said. If selected, they will retroactively earn their rank and any back pay that is due. “AFPC processes more than 120,000 enlisted promotion tests annually and takes accountability and control of promotion tests very seriously through rigorous standards,” he said. “It is a rare occurrence when answer sheets are lost in the mail or have other issues that make them unusable. Outside of these two recent packages, there are no other reported cases of missing or damaged scoresheets in 2021.” A participant at the June 28 town hall said their test was one of those misplaced and questioned Kelly and Chief Master Sergeant of the Air Force JoAnne Bass about the problem. Kelly apologized to the airman and pledged to address the issue. Air Force headquarters, Air Education and Training Command and AFPC are working on a blueprint to roll out online testing that is accessible at each installation. Kelly hopes to have that plan in place by the end of the year. The initiative requires policy changes to handle issues like keeping sensitive information from some career fields secure online, as well as enough funding to see it through. “Airmen deserve the benefits that come with electronic testing, including eliminating the risks of relying upon mailed tests while providing improved security, timeliness of test scoring and familiarity of online testing for airmen,” Dickerson said. “It’s the right thing to do.” Bass said she’s embarrassed that the Air Force still uses paper tests this far into the digital age. “That’s one of the things on my ‘things to do’ list,” she said. “Please hold us to the fire on that one.” In its bid to modernize promotion testing — which others argue is an outdated way to decide who should move up the career ladder — the Air Force is also taking a new look at how it scores candidates for promotion. Experience should be the next most important metric, Kelly said. That would be a departure from weighting scores in favor of first-time testers rather than those who have sought promotion to a particular rank multiple times. Prioritizing newer candidates is an approach that started in 2014, but the service’s thinking has evolved since then, the three-star general added. In the future, people would earn greater or fewer points based on their performance, and the same based on their time in the service and in a particular grade. “We know that those experiences out there allow people to be in leadership situations and see things that are going to make them even more effective,” Kelly said. “Somebody with an equal performance and more experience is going to get more points than somebody with the same performance and less experience.” The Air Force hopes to update its promotion scoring system by August, or by the 2022 testing cycle if needed. Kelly indicated the recent flood of changes to how the Air Force manages its airmen’s careers will end soon. The service is still considering moving to a system that offers airmen a five-year eligibility window to rise to the next rank, which has been in the works for at least a year. That approach is attractive, but difficult to execute without putting some airmen at a disadvantage, Kelly said. He believes they’re getting closer on a way forward. On the enlisted side, Bass said an enlisted force development strategy is coming later this year. That pairs with ongoing efforts to move enlisted airmen into the service’s Talent Marketplace and make the base-selection process more equal. For example, it may benefit one family to remain at the same base for eight years, while another airman feels held back by staying that long. “We will shift … our focus a little bit in ’22 to really get after the evaluation system, the [Enlisted Performance Report], etc.,” she said. “We have some pretty great things that are coming along.”