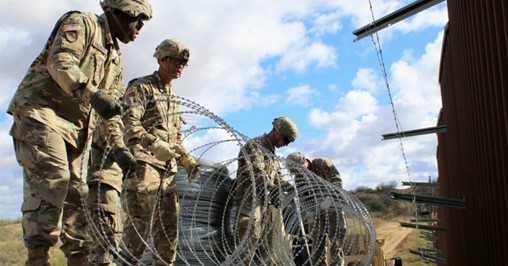 Secretary of Defense Lloyd Austin authorized the deployment of as many as 3,000 troops to the U.S. border with Mexico for fiscal year 2022, Pentagon press secretary John Kirby said Tuesday. Six months after President Joe Biden rescinded a national emergency order from 2018, thousands of National Guardsmen are still at the southern border, providing surveillance assistance to Customs and Border Patrol. The authorization for 2022 extends the military’s mission at the border into its fourth year. At its peak, the Pentagon had authorized up to 5,500 troops on the border, which dropped to 4,000 last summer. Since 2018, the DoD has obligated at least $841 million for border security operations, according to a Government Accountability Office report early this year. The authorization for 2022 comes as many states are sending law enforcement and National Guard troops to Texas as part of Operation Lone Star, an effort to stem the smuggling of people and drugs into the state, according to a statement from Texas Gov. Greg Abbott. “We will surge the resources and law enforcement personnel needed to confront this crisis,” the statement says. Most notably, North Dakota has recently funded a deployment of 50 Guardsmen using a private donation from Willis and Reba Johnson’s Foundation. That particular mobilization has raised questions about the ethics of using private funds for a public service, along with questions about whether Operation Lone Star is a legitimate matter of national defense or if it is political theater. Arkansas has authorized up to 40 National Guard troops to make the trip to the border for up to 90 days, and Iowa has sent 24. There were 18,945 family members and 9,297 unaccompanied children encountered at the border in February — an increase of 168 percent and 63 percent, respectively, from the month before, according to the Pew Research Center. Facilities at Joint Base San Antonio and Fort Bliss, Texas, were also tapped this spring to accommodate the influx of children fleeing Central America. Another GAO report from September 2019 found that the deployment of Guardsmen to the border where they perform non-military functions could have a negative effect on morale, as well as military readiness.