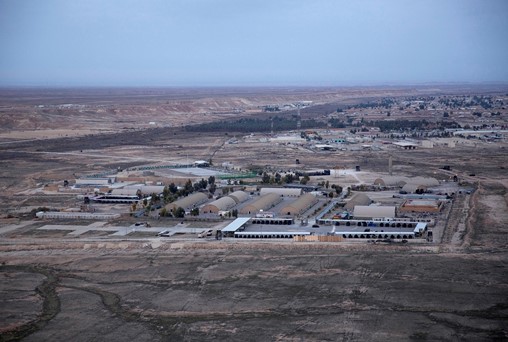 A rocket attack on an Iraqi base housing U.S. troops resulted in two minor injuries, a U.S. military spokesman announced on Twitter Wednesday morning. The Ain Al-Asad Air Base was hit by 14 rockets at about 12:30 p.m. local time, landing on the base and perimeter, Army Col. Wayne Marotto, a spokesman for Operation Inherent Resolve, tweeted. Damage is still being assessed. Marotto told Military Times he did not yet know the nationality of those injured. In addition to the rockets that landed on the base, the incident caused damage to a nearby Iraqi neighborhood when unlaunched rockets exploded, according to Iraqi officials. A truck with a container inside it stopped in the Al-Baghdadi area in Anbar Governorate, according to Iraqi military officials. Though it appeared to be carrying bags of flour, it was carrying a base for launching rockets. “Meanwhile, the rest of the rockets that were left inside exploded, causing damage to nearby citizens’ homes and a mosque,” the official account of the Iraqi Security Media Cell tweeted. A militia group called Liwa Tha’ar al-Muhandis has claimed responsibility for the attack, according to Tamer Badawi, an independent analyst and writer. Liwa Tha'ar al-Muhandis: "..Our mujahdins managed to target Ain al-Asad that US occupation uses in Anbar with 30 Grad rockets at 12:33 & targets have been struck w/ high precision. We reiterate to the brute occupation that we will force you to withdraw from our lands defeated.." pic.twitter.com/5aSLxQAN5S — Tamer Badawi تامر بدوي (@TamerBadawi1) July 7, 2021 Marotto told Military Times he is aware of the open-source claims, but could not confirm them. The incident is the latest in a series of attacks in Iraq and Syria against facilities housing U.S. personnel, including this base in Iraq’s western Anbar province. A weaponized drone was shot down near the U.S. Embassy compound in Baghdad after midnight on July 5. There were no casualties. Two U.S. military officials said the drone was launched by Iranian proxies, adding that it was weaponized with explosives and was loitering over the U.S.-led coalition base in Baghdad. The U.S. Embassy said defense systems at the compound “engaged and eliminated an airborne threat.” Multiple rockets hit a U.S. base in Syria on June 28 at approximately 7:44 p.m. local time, according to Marotto. U.S. forces returned fire with counter-battery artillery, he tweeted at the time. “There are no injuries and damage is being assessed,” Marotto tweeted. On June 20, a rocket fell near the sprawling al-Asad base but did not explode and there was no significant damage. On May 24, a single rocket struck near the base. More than 100 U.S. troops were treated for traumatic brain injuries after an Iranian ballistic missile barrage on Al-Asad on Jan. 8, 2020. That was in response to a U.S. airstrike days earlier that killed Iran’s Quds Force Commander Qassem Soleimani on Jan. 3. “Iran-backed militias have conducted at least five one-way UAV attacks against facilities used by U.S. and coalition personnel in Iraq since April as well as ongoing rocket attacks against U.S. and coalition forces,” Navy Cmdr. Jessica McNulty, a Pentagon spokeswoman, told Military Times on June 27. The U.S. has responded with force in response to those attacks. Late last month, President Joe Biden ordered U.S. F-15 and F-16 jets to hit targets in Iraq and Syria that the Pentagon said are associated with that threat. “The targets were selected because these facilities are utilized by Iran-backed militias that are engaged in unmanned aerial vehicle (UAV) attacks against U.S. personnel and facilities in Iraq,” Pentagon spokesman John Kirby said in a statement at the time. The strikes “targeted operational and weapons storage facilities at two locations in Syria and one location in Iraq,” both of which lie close to the border between those countries, Kirby said. “Several Iran-backed militia groups, including Kata’ib Hezbollah (KH) and Kata’ib Sayyid al-Shuhada (KSS), used these facilities.” The three targets were specifically associated with the militia drone threat — command, control and logistics — a defense official told Military Times. The U.S. aircraft, which returned safely to their bases, used a mix of precision-guided munitions, the defense official said.