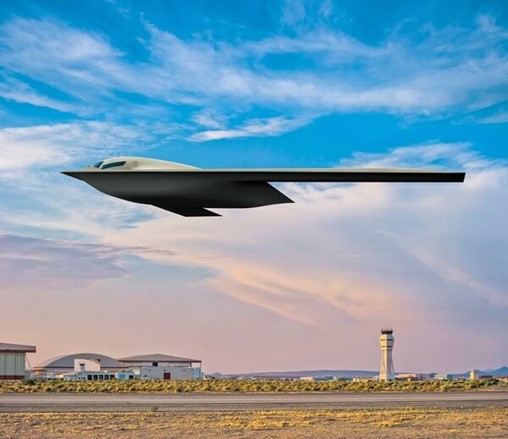 The US Air Force (USAF) has posted further details of the Northrop Grumman B-21 Raider on its official website, as well as a new artist's rendering of the stealth bomber that is due to enter service in the coming years. Published to the Fact Sheets inventory listing on 6 July, the new B-21 entry revealed for the first time that a minimum of 100 will be acquired (previously, the USAF had said only that the number would be ‘approximately' 100, with 80–100 being the consensus figure), and that the unit cost will be USD639 million (in 2019 dollars). A new artist's impression showed the by-now-familiar B-2-esque planform of the B-21, although with a novel curved cockpit window design that is unlike any other aircraft built to date. The reason for this design is not clear, although as with previously released renderings of the aircraft the USAF has noted that this latest image is “an interpretation” of what the aircraft might look like, rather than an actual likeness. Previously known as the Long-Range Strike Bomber (LRS-B), the B-21 is one of the USAF's top three acquisition priorities, along with the Lockheed Martin F-35A Lightning II and the Boeing KC-46A Pegasus aerial refuelling tanker. It will replace the Rockwell B-1B Lancer, which is deemed to not be as survivable in modern threat environments against improved surface-to-air missiles and integrated air defences, and the Northrop Grumman B-2A Spirit. Interestingly, it will not initially replace the Boeing B-52H Stratofortress, which both the B-1B and B-2A were originally expected to supersede. Already a Janes subscriber? Read the full article via the Client Login Interested in subscribing, see What we do The Power of Interconnected Intelligence