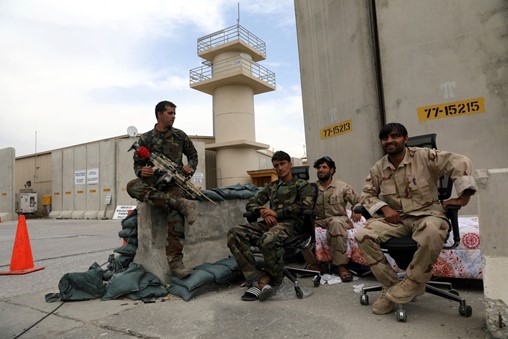 The U.S. decision to leave Bagram Airfield at night after 20 years without informing the new Afghan base commander of the exact day and hour was a matter of “operational security,” Pentagon spokesman John Kirby told reporters Tuesday afternoon. “It wasn’t done in some sort of shroud of secrecy,” Kirby said. “And as for not being able to specifically provide the hour or hours of departure, again, I think you would all understand, why we do it that way.” “It’s not a statement about whether we trust or don’t trust our Afghan partners,” Kirby added. “It’s a statement of the fact that we have to consider that this drawdown could be contested by the Taliban, and we have to take that into consideration.” Officials announced Friday that the U.S. had completely vacated its biggest airfield in Afghanistan ahead of final withdrawal the Pentagon says will be completed by the end of August. But Afghan military officials told the Associated Press and other media outlets that they didn’t know about the departure until after U.S. forces were already gone. Afghan base officials on Monday told the Associated Press during a tour that they had heard rumors of a U.S. military departure, but “by seven o’clock in the morning, we understood that it was confirmed that they had already left Bagram,” Gen. Mir Asadullah Kohistani, Bagram’s new commander said. Before Afghan forces could secure Bagram, a small army of looters invaded, ransacking facilities and rooting through storage tents before being evicted, according to Afghan military officials. “At first we thought maybe they were Taliban,” said Abdul Raouf, a soldier of 10 years, told the AP. He said the U.S. forces called from the Kabul airport and said, “we are here at the airport in Kabul.” Kirby said Afghan military and civilian leaders were aware that U.S. troops would be leaving Bagram, but not exactly when. “This wasn’t done in a vacuum,” Kirby said. “I can’t speak for the level of information that went down the Afghan chain of command, but I can tell you that Afghan leaders, civilian and military, were appropriately coordinated with and briefed about the turnover of Bagram airbase. In fact, some of that briefing included a walkthrough of facilities on the base with senior Afghan leaders.” Final conversations with Afghan officials “occurred about 48 hours prior” to the departure, Kirby said. “Obviously, for operational security reasons we didn’t go into the exact hour at which all U.S. forces would leave Bagram,” he added. “If we had been so specific as to give the exact hour we were turning over that base and leaving, that would not have been a prudent thing to do.” Officials from U.S. Central Command and U.S. Forces-Afghanistan did not immediately respond to requests for comment. The U.S. departure from Bagram comes as Taliban forces are sweeping across Afghanistan. But Kohistani, the Afghan commander at Bagram, told AP that the Afghan National Security and Defense Force could hold on to the base despite those battlefield losses. At the press conference, Kirby declined to say whether the lack of details provided to Afghans had anything to do with concerns that Afghan forces might turn on U.S. troops in so-called “Green-on-Blue attacks.” Afghan forces interviewed by the AP and other media outlets said they viewed the way the departure occurred as a slap in the face to long-standing allies. “In general, we felt it was just better to keep that information as close hold as possible,” said Kirby. “I can’t speak for how the Afghans interpreted that decision, but it was a decision made in the best interest of the safety and security of our people.”