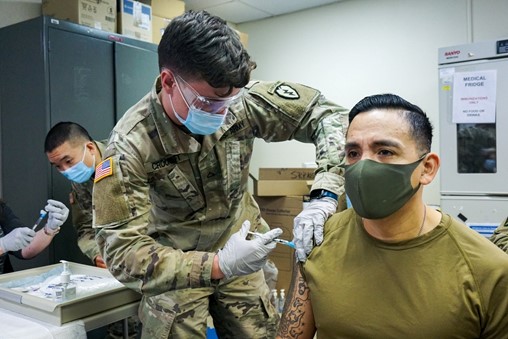 Defense Department senior leaders have had “preliminary discussions” about making the COVID-19 vaccine mandatory for all U.S. troops once the vaccines receive full approval from the Food and Drug Administration, Pentagon spokesperson John Kirby said during a Tuesday afternoon press briefing. Kirby was adamant that the vaccine remains voluntary — for now. “Right now it’s being used under Emergency Use Authorization, which makes it a voluntary vaccine,” he said. “Should the FDA approve it, then I am certain that Pentagon leadership will take a look at what our options are going forward, including the potential option of making mandatory.” But when a reporter asked him about the Army ordering its commands to prepare for the vaccine to become mandatory in September, Kirby added that the military is already considering its “logical next steps...if and when FDA approval comes in.” “We’re [a] planning organization,” said the Pentagon spokesperson. “I don’t think that should surprise anybody that we’re trying to think about what the implications would be and how...we’d react to [full FDA approval].” Although Kirby said there is no decision as of yet, communications to the force suggest that more than thinking is underway. Army Times first reported the Army’s planning directive, which came via an execute order sent to the force by Department of the Army Headquarters. And the Navy also recently told sailors to expect a mandatory vaccination program despite having the highest voluntary vaccine acceptance rate thus far. Kirby said nearly 69 percent of the force has received at least one dose of the vaccine, but demand for the shot is starting to dry up across the military — and the broader American public. The Navy currently leads the way among the service branches in COVID-19 vaccinations, with 77 percent of active duty sailors receiving at least one dose, according to data shared by Army Lt. Gen. Ronald Place, director of the Defense Health Agency. The Army is second with 70 percent, followed by 61 percent for the Air Force and 58 percent for the Marine Corps. Kirby encouraged troops hesitant about the vaccine to opt in. “They’re safe, they’re effective, and it’s really the best incentive to protect you, your families and your teammates,” he said. Military Times Pentagon bureau chief Meghann Myers contributed to this report.