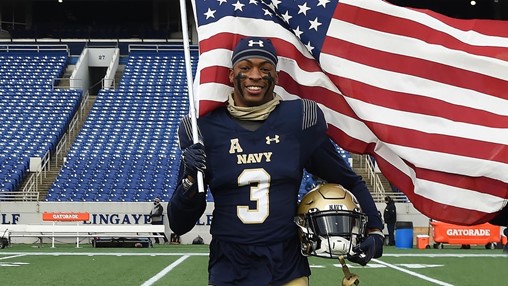 Defense Secretary Lloyd Austin has given former Navy cornerback and NFL hopeful Cameron Kinley the green light to postpone his Navy service and join the Tampa Bay Buccaneers for training camp. Kinley shared the news on Twitter Tuesday, saying, “Today I was informed the Secretary of Defense will be allowing me to continue my journey with the Tampa Bay Buccaneers and attend training camp at the end of this month. “I am extremely appreciative of Secretary Austin’s decision and I am excited to represent our fine military in the National Football League. This past month has been very challenging and I am thankful for everyone who has supported me in any way.” Kinley’s dream of playing in the National Football League was one step closer toward reality after the Super Bowl champion Tampa Bay Buccaneers signed him as an undrafted free agent. But that dream took a hit last month when the U.S. Naval Academy’s 2021 class president was informed that his waiver request to postpone his looming five-year service window had been denied. “I have spent the past week processing my emotions, as it is very difficult to have been this close to achieving a childhood dream and having it taken away from me,” Kinley said at the time. Following the June decision, a spokesman for acting Secretary of the Navy Thomas W. Harker told Navy Times the Navy secretary “declined to forward requests from recent Naval Academy graduates to the Secretary of Defense, seeking to delay their commissions.” “Admission to the Naval Academy is an extensive and competitive process,” Capt. Jereal Dorsey said. “The mission of the Naval Academy is to develop young men and women to commission as officers in the Navy or Marine Corps. When students accept admission and continue their education in this program, there is an understanding and acknowledgement that they will upon graduation be commissioned. Every Midshipman attends on the same terms and each has the same responsibility to serve. Exceptions to that commitment to serve have been rightfully rare.” Those petitioning for a waiver on Kinley’s behalf included Sen. Marco Rubio, R-Fla., who penned a letter to President Joe Biden urging for those with the ability to do so to “right this wrong.” “Grant Mr. Kinley’s waiver to play in the NFL, and send a message to future academy graduates that the United States is a country where Americans can follow their dreams and be true to their commitment,” Rubio wrote. In a statement acknowledging the decision, Austin said Kinley would become a part of the Inactive Ready Reserve “for the duration of his football career.” “Upon completion of his playing time, we look forward to welcoming him back inside the ranks as a naval officer,” Austin said. “In the meantime, we know Cameron will take every opportunity on and off the field to ably represent the Navy and the military to the American people and to assist us in our recruiting efforts. I applaud Navy leadership for finding this way to showcase both Cameron’s athletic prowess, as well as the quality and professionalism of our student athletes and our personnel.” There are currently four other academy graduates of the class of 2021 chasing spots on NFL rosters. The Seahawks signed West Point grad Jon Rhattigan, while the Broncos, Rams and Jets signed Air Force graduates Nolan Laufenberg, George Silvanic, and Parker Ferguson, respectively. Inversely, a number of professional athletes have relinquished personal control to serve in uniform before going on to a career in professional sports, including U.S. Naval Academy graduates Roger Staubach, who won two Super Bowls with the Dallas Cowboys, and NBA Hall of Fame-inductee David Robinson, a two-time NBA champion and 1995 MVP with the San Antonio Spurs.