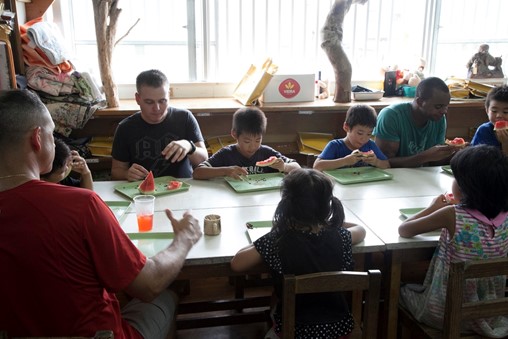 Defense Department leaders have identified child care availability as a major readiness issue for military troops and families. Now, House lawmakers want to know if veterans are facing the same daycare needs. Included in the draft Veterans Affairs budget proposal approved by the House Appropriations Committee last week is a requirement for department officials to study the availability of child care services for veterans — particularly ones currently enrolled in college classes. “The report should identify barriers that student veterans encounter in accessing child care, the number of veterans who have struggled to find reliable child care, and establish whether lack of child care has impacted veterans’ ability to complete education or training programs,” the bill states. A recent report from Student Veterans of America noted that more than half of student veterans in America today are parents. “Affordable childcare is critical to ensuring their success in higher education.” But data on availability at schools or in nearby communities is elusive. The new report could provide a baseline for future proposals to increase subsidies for student veterans with daycare needs or to launch new services to help those parents find available spots. A separate section of the budget bill dealing with Defense Department construction sets aside $213 million for planning and design of child development centers at military bases. That’s more than 10 times what the White House asked for in its initial budget plan for fiscal 2022. Military leaders have said that a lack of child care at military bases creates scheduling and stress issues for troops, which leads to readiness concerns for the entire force. Lawmakers in recent years have worked to increase those options for active-duty personnel. The proposed appropriations report, which would be due 120 days after the budget becomes law, would also look at “veterans that use family, friend, or neighbor forms of child care” to evaluate how those impact veterans. The full House membership is expected to vote on the VA budget bill (including the report) later this month. But the measure still faces months of negotiations with Senate appropriators before it can be finalized and sent to the president to become law.