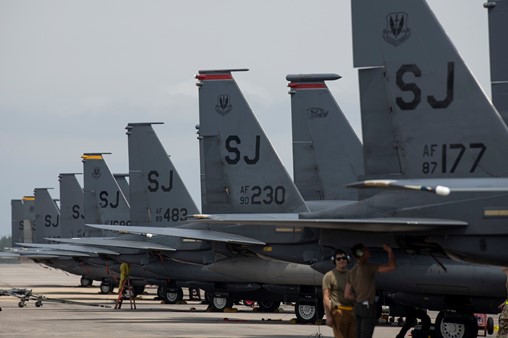 As the U.S. Air Force continues to retool to counter the “near peer” threats of China and Russia, Air Combat Command (ACC) is targeting October for completing its campaign plan regarding such threats. ACC said that the campaign plan working group stood up in March and is focusing on “a sustainable force offering optimized for adaptive operations in a contested environment and able to rapidly deploy and generate combat power in a peer environment.” While top discussion topics among defense analysts have been the Air Force’s fiscal 2022 budget proposal to retire 201 legacy aircraft and the $2.2 billion increase in Air Force research and development funding, including $1.5 billion for the Next Generation Air Dominance fighter family, $3.3 billion for the Northrop Grumman [NOC] B-21 Raider stealth bomber, and $2.5 billion for the company’s Ground Based Strategic Deterrent next generation ICBM, the service’s organizational efforts have remained somewhat in the background. The final campaign plan working group product will be an order by Air Force Gen. Mark Kelly, the commander of ACC, “to units outlining the requirement to align our force generation and presentation into the four phase cycle (reset, prepare, ready, available), prepare our forces for agile combat employment, and optimize our wing organizational structures to counter a peer threat,” per ACC. “The goal of the campaign plan working group is to identify what right looks like before the order is given, so units can act immediately towards these reorganization efforts.” The campaign plan’s envisioned two-year force generation cycle is to consist of four six-month readiness phases to improve the Air Force posture against “near peer” adversaries. “Forces will deploy as needed in the ‘Available’ phase, recharge in the ‘Reset’ phase, begin increasing readiness levels in the ‘Prepare’ phase, and gear up to deploy in the ‘Ready’ phase,” per ACC. ACC did not respond by press time on July 2 on whether the campaign plan working group is considering changes to the Combat Air Forces (CAF) squadron sizes. The ACC campaign plan working group has three lines of effort in line with the 2018 National Defense Strategy’s emphasis on countering “near peer” threats: implementing a new CAF force generation (CAFFORGEN) model, optimizing wings for the “high-end” fight, and training Agile Combat Employment (ACE)-capable forces. While squadrons have traditionally been the mainstay of the Air Force’s force presentation constructs–divided among flights, squadrons, groups, and wings—it appears that wings, specifically “lead wings,” will be most applicable to countering near peer adversaries. ACC said that such wings, composed of squadrons from different locations under one commander, “will align, train, and exercise as an aggregated force package, enabling them to arrive in theater fully combat credible for employment by the air component commander.” The Air Force appears to be moving away from its past reliance on fixed bases, which present ready targets of opportunity for “near peer” adversaries, and toward ACE-capable forces’ rapid deployment to expeditionary locations. “Years of low intensity combat in the Middle East, coupled with a force management construct not currently optimized for combat in a highly contested environment, has created an opportunity to drastically reform how ACC organizes, trains and equips its forces,” ACC said. Kelly has said that “peer competition, crisis and combat does not provide us with ‘months’ to assess and study requirements, execute the RFF [request for forces] process, work sourcing, schedule deployments and eventually become a cohesive team.” “We have to generate high-performing combat teams before combat – and get them in place at the speed of relevance,” he said. ACC said that having all CAF forces 100 percent ready all of the time is unsustainable and that the command “is working to develop a standard for how a wing should be organized as they rotate through the new CAFFORGEN cycle, and finalizing mechanisms needed to assess readiness and certify wings for eventual deployment.” “This plan will impact expeditionary airmen who physically deploy into a theater, as well as airmen who deploy in place,” ACC said.