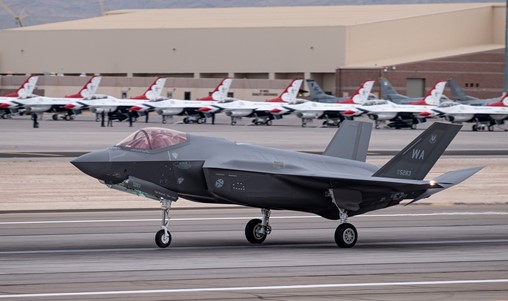 While the U.S. Air Force’s fiscal 2022 budget request proposes retiring 201 aircraft, including two squadrons of F-15C/Ds, to help pay for a requested $2.2 billion increase in research and development, U.S. Air Force Chief of Staff Gen. Charles Q. Brown is pressing his staff to focus on analyzing the mix of capabilities that the service will need to deter China and Russia, not platform numbers. “It’s easy for us to talk about numbers, but I’m also talking about capability, Brown said on July 1 in an Atlantic Council “Commanders Series” virtual forum. “For example, if I had 1,000 F-86s versus 1,000 F-35s—two different airplanes, different capability. What I really look at is the capabilities requirement. The goal for the United States Air Force, as I laid out in Accelerate Change or Lose and what we’ve been able to work on as we started to build the FY ’21 budget done by my predecessor and what we’ve done with FY ’22 and as we start working to FY ‘23 is how we look at where the Air Force needs to be in about the 2035 time frame.” The F-86 was a Korean War-era fighter jet. The Air Force has planned to buy 1,763 Lockheed Martin [LMT] F-35As, but defense analysts have said that the Air Force may reduce that planned buy to 1,000 to 1,300 jets. The Air Force would lose two squadrons of Boeing [BA] F-15C/D air superiority fighters if Congress enacts the service’s fiscal 2022 budget plan. The Air Force plans to reduce its F-15C/Ds by 48 next fiscal year from 234 to 186. The latter is the same number of Lockheed Martin F-22 stealth fighters that the service has. The Air Force divestment request could face particularly strong congressional push back, given that one of two possible replacements for the F-15C/D, the Boeing F-15EX, is not rolling off the production line in sufficient numbers to take up the slack. By the end of fiscal 2022, the Air Force says that it will have, as now, just two F-15EXs in service. The F-15EXs are in testing at Eglin AFB, Fla. The Air Force wants to retire 201 fighter, tanker, transport, and intelligence, surveillance and reconnaissance aircraft in fiscal 2022 to save $1.4 billion to help pay for the requested R&D increase of $2.2 billion (Defense Daily, May 28). Brown suggested to the Atlantic Council on July 1 that the Air Force is making headway on preparing for near peer adversaries. “We have some of the capability today, but I want to make sure we have the right mix of capabilities with the right numbers to make it come together,” he said. “It’s easy to pick numbers and talk about specific platforms, but it’s the mix of capabilities that come together to allow us to do the air superiority, the global strike, the rapid global mobility, the command and control, and the ISR. This is where I’ve pushed on our staff to really do the analysis associated with it because there could be a lot of, I would say, in some cases, emotion or different entities or constituencies that are in love with a particular platform. It’s how we have that mix of capabilities to ensure the United States Air Force can do airpower ‘anytime, anywhere.’”