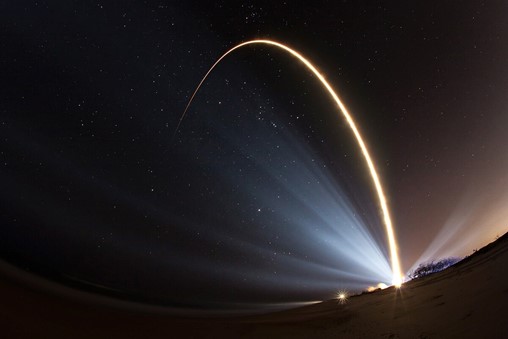 WASHINGTON — Lockheed Martin secured $4.9 billion to build three missile warning satellites for the U.S. Space Force, according to a Jan. 4 announcement. The company already received $2.9 billion in 2018 to begin work on the satellites, which will be part of the Next Generation Overhead Persistent Infrared (Next Gen OPIR) system. That contract covered development through critical design review, completed in October 2020. With that step finished, the program was ready to move forward with manufacturing the satellites. Next Gen OPIR is being built to replace the Space-Based Infrared System, the nation’s premier missile warning constellation. The new constellation will be made up of five satellites: three in geosynchronous orbit and two covering the polar regions. The Space and Missile Systems Center (SMC) has selected Lockheed Martin to contribute the former, while Northrop Grumman will provide the latter. The Space Force awarded Northrop Grumman a $2.4 billion contract modification in May for phase one design and development, procurement of critical flight hardware and risk-reduction efforts leading to critical design review. The two infrared sensors under development for Next Gen OPIR passed their preliminary design review in May. Those sensors are being developed by Raytheon Technologies and Northrop Grumman Aerospace Systems working with Ball Aerospace. The U.S. Air Force has worked to shift more money to the Next Gen OPIR program in recent years in an effort to ensure the first satellite is delivered in 2025. That’s required more money up front, which the Air Force has shifted to the program through a number of reprogramming requests, a source of division between competing versions of the annual defense budgets in the House and Senate. But SMC credited that reprogramming with keeping Next Gen OPIR on track. “While the program acceleration to meet this threat head on created a near-term funding shortfall, Congress’ support of the DoD’s $161M reprogramming request has kept the program on track, and I am confident we will close the remaining shortfall in FY20 to enable delivery of our first satellite in 2025,” Col. Dennis Bythewood, SMC’s program executive officer for space development, said in October.