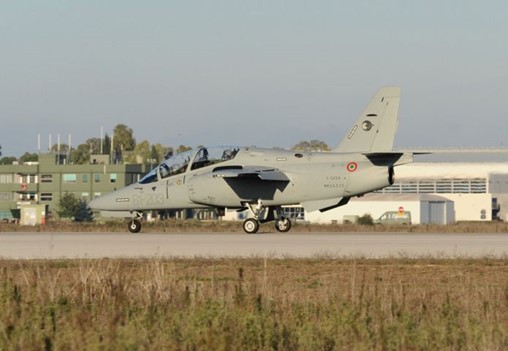 The Italian Air Force (Aeronautica Militare Italiana: AMI) has received into service the first two Leonardo M-345 High Efficiency Trainer (HET) aircraft, the manufacturer announced. The first two out of an order for 18 and a total requirement of 45 were delivered to the AMI on 22 December 2020. The milestone came about four years after the contract for an initial five aircraft was signed in January 2017. Designated T-345 in national service, the M-345 HET will replace the AMI’s current 137 MB-339s that have been in service since 1982 while augmenting its 18 M-346 Masters. “The Italian Air Force’s acquisition of the new aircraft is an important step forward in the modernisation of its fleet, with the M-345 replacing the MB-339A in the air force’s second and third military pilot training phases,” Leonardo said. “The new M-345, designed to meet basic and basic-advanced training requirements, will complement the in-service M-346, which is used for advanced pilot training. Leonardo’s integrated training system […] benefits from experience with, and technology developed for, the M-346, which includes a ‘live virtual constructive’ capability. This allows aircraft [that] are flying live training missions to incorporate simulated friend-or-foe elements into scenarios, allowing the pilot to be exposed to the full range of possible operational situations.” First revealed in 2013, the M-345 HET is a development of the baseline M-345 jet trainer, which was a redesignation of the Aermacchi M-311 (itself an upgrading of the Aermacchi S-211 jet trainer). The aircraft has been designed to provide basic through to intermediate pilot training at reduced costs and can also be utilised in an operational capacity.