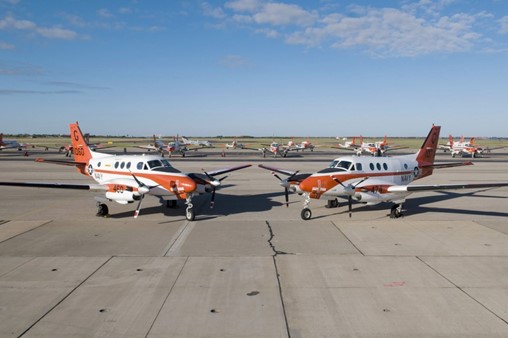 The US Navy (USN) is to award a contract to acquire a new aircraft to train multi-engine students for itself, the US Marine Corps (USMC), and US Coast Guard (USCG) in fiscal year (FY) 2023. A revised request for information (RFI) for the Multi-Engine Training Aircraft (META) requirement, calling for a commercially available aircraft to replace the Beechcraft T-44 Pegasus variant of the King Air 90 that the service has used for the role since 1980, was issued by the Naval Air Systems Command (NAVAIR) on 6 November. The new RFI replaces one that was issued in May. The original solicitation posted on the beta.sam.gov website said, “This Performance Based Specification (PBS) establishes the overall system capabilities, functionality, and equipage for the commercial airplane that is part of the Multi Engine Training System (METS)”. This new RFI now includes a timeline for the planned procurement. As noted by NAVAIR, a draft request for proposals (RFP) will be issued in the fourth quarter of FY 2021, to be followed by a final RFP in the second quarter of FY 2022 and a contract award in the first quarter of FY 2023. Both RFIs laid out some required performance parameters for the candidate aircraft, including a cruise speed of no less than 195 kt, a service ceiling of no less than 20,000 ft, and an endurance of no less than 3.5 hours (while performing certain stated flight profiles). Other specifications included passenger seating numbers and baggage carrying loads. While the solicitations made no mention of anticipated aircraft numbers, Janes World Navies