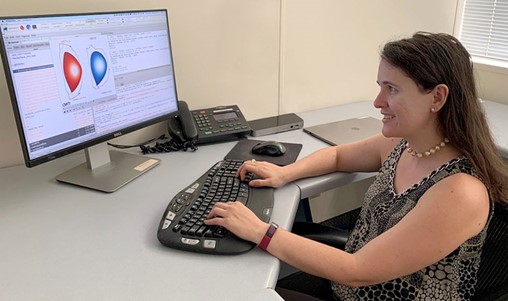 Experiments, modeling and measurements funded by DOE “One of the great strengths of the fusion energy field is its collaborative nature, and this program is a great example of that,” said DIII-D Director Richard Buttery. “Joint DIII-D/NSTX activities over the past two decades have been very productive and we look forward to continuing our collaborations on NSTX-U.” DIII-D, which General Atomics operates as a national user facility for DOE’s Office of Science, is the largest magnetic fusion research facility in the country. It hosts researchers from more than 100 institutions across the globe, including 40 universities. The heart of the facility is a tokamak that uses powerful electromagnets to produce a doughnut-shaped, or toroidal, magnetic containment for confining a fusion plasma. In DIII-D, plasma temperatures more than 10 times hotter than the Sun are routinely achieved. At such extremely high temperatures, hydrogen isotopes can fuse together and release energy. (See Fusion Energy 101 explainer below for more detail on how fusion works.) NSTX-U is also a tokamak, but it is more spherical in shape, looking like a cored apple with a much smaller central hole than the doughnut of DIII-D. The NSTX-U tokamak, after completing upgrades and repairs, is expected to resume operations as early as late 2021. The research that DIII-D scientists will focus on will determine whether the spherical shape of the tokamak, coupled with its heating and electric current-drive systems, can produce benefits that could help with the design of the next generation of fusion reactors. DIII-D researcher Kathreen Thome is leading one of the teams that will explore ways to sustain longer periods of operation using heating and current-drive techniques in the spherical device. Thome’s team will use its extensive computer modeling and simulation expertise to predict the best approaches to utilizing NSTX-U capabilities, then work to optimize those scenarios once the facility begins operations. “It’s great to get a chance to apply your research to another tokamak with a different configuration,” Thome said. “Exploring both tokamak configurations brings us closer to understanding the underlying physics, moving us closer to our goal of practical fusion energy.” In tokamaks, the plasma must carry a current to generate the magnetic structure that holds the heat. However, plasmas can self-generate this current in a process known as the “bootstrap effect.” This could greatly reduce the need for externally driven current in future fusion power plants, and thus cut costs or increase electrical output. These techniques have been experimentally evaluated on DIII-D, successfully validating state-of-the-art theory-based simulations. Thome’s team will apply knowledge gained from DIII-D to NSTX-U scenarios to understand how plasmas with high bootstrap currents could benefit future reactors. The other DIII-D team will be working on sensors that will explore how energetic “fast” ions in NSTX-U transfer power to the plasma as they whirl around the device. This understanding will be key to keeping those fast ions contained in the magnetic fields of the tokamak, thereby allowing sustained high performance. The team will build sensors to measure how the fast ions interact with magnetic waves in the plasma, which can reduce performance by kicking the fast ions out of the magnetic containment. GA researcher Luke Stagner will be working on the fast-ion project with Bill Heidbrink, his doctoral thesis advisor from the University of California, Irvine. “This is an exciting time to be joining the U.S. fusion energy community,” Stagner said. “If all goes according to plan, we will have both of our major tokamaks online and working toward the same goal of creating a stable and sustainable approach to fusion energy.” About General Atomics: Since the dawn of the atomic age, General Atomics innovations have advanced the state of the art across the full spectrum of science and technology – from nuclear energy and defense to medicine and high-performance computing. Behind a talented global team of scientists, engineers, and professionals, GA’s unique experience and capabilities continue to deliver safe, sustainable, economical, and innovative solutions to meet growing global demands. About the DIII-D National Fusion Facility: DIII-D is the largest magnetic fusion research facility in the U.S. and has been the site of numerous pioneering contributions to the development of fusion energy science. DIII-D continues the drive toward practical fusion energy with critical research conducted in collaboration with more than 600 scientists representing over 100 institutions worldwide. For more information, visit www.ga.com/diii-d About PPPL: PPPL, on Princeton University's Forrestal Campus in Plainsboro, N.J., is devoted to creating new knowledge about the physics of plasmas — ultra-hot, charged gases — and to developing practical solutions for the creation of fusion energy. The Laboratory is managed by the University for the U.S. Department of Energy’s Office of Science, which is the single largest supporter of basic research in the physical sciences in the United States and is working to address some of the most pressing challenges of our time. For more information, visit energy.gov/science For more information contact: Zabrina Johal 858-455-4004 Zabrina.Johal@ga.com Fusion Energy 101 Nuclear fusion occurs when light elements such as hydrogen are brought together at extremely high temperatures and pressures, causing the nuclei to fuse into heavier elements such as helium. This process powers stars like our sun and releases vast amounts of energy. Fusion differs from nuclear fission, where heavy elements split into lighter elements, releasing energy. Fission is the process used in existing commercial nuclear power plants. Fusion power plants will be fueled by a mixture of hydrogen isotopes: deuterium (the nucleus comprises a proton and a neutron) and tritium (the nucleus comprises a proton and two neutrons). Deuterium can be extracted from seawater and tritium can be created from small amounts of lithium in the reactor, making fusion a nearly limitless, carbon-free source of energy that leaves no long-lived radioactive waste. One way to achieve fusion on earth is in a tokamak (a doughnut-shaped metal vacuum chamber) surrounded by extremely powerful magnets that create strong magnetic fields. Creating fusion in a tokamak requires that the fuel be converted into a plasma by heating it to over 100 million degrees.