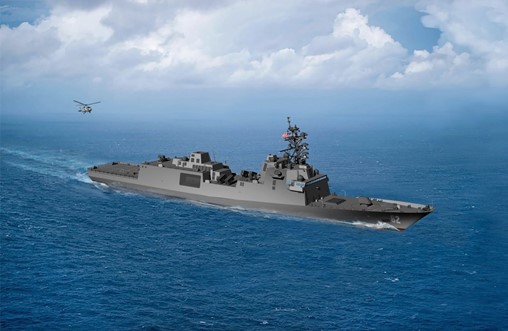 The first ship of the new guided-missile frigate (FFG(X)) class will be named Constellation (FFG 62) and the class of ships will be the Constellation class, US Navy (USN) Secretary Kenneth Braithwaite said on 7 October. The name was selected in honour of the first US Navy ships authorised by Congress in 1794 — six heavy frigates named United States , Constellation , Constitution , Chesapeake , Congress , and President , Braithwaite said. The ships will provide presence in open ocean and power projection ashore, the secretary said. He pointed out frigates are part of the recent future ship-fleet plan detailed by Defense Secretary Mark Esper that will rely on “small, multimission combatants like Constellation to distribute capability across the surface fleet”. As the next generation of small surface combatants will contribute to meeting the goal of 355 battle force ships, the USN said in a statement, with the ability to operate independently or as part of a strike group, featuring an Enterprise Air Surveillance Radar (EASR), Mk 41 Vertical Launching System, and Baseline 10 (BL 10) Aegis Combat System capabilities.