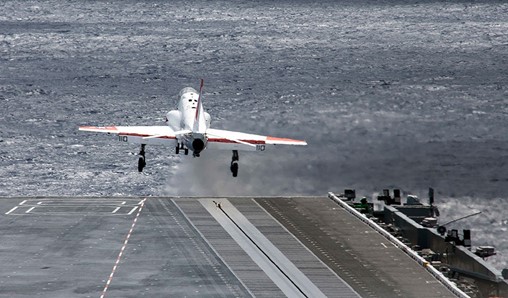 “CVN 78 passed the half-way mark of its PDT&T, and we are well underway toward achieving the cats and traps milestones by the end of this rigorous testing phase,” stated Scott Forney, president of GA-EMS. “In addition to the demanding system shakedown testing, the ship, and EMALS and AAG, are providing valuable capacity to meet the Navy’s certification and training requirements for today, with an eye toward the future as the next Ford class carriers begin to enter the fleet. We are extremely proud of our dedicated team supporting the ship’s crew as they continue to qualify naval aviators as well as demonstrate the systems capabilities under combat operations tempo.” During CVN 78’s at sea periods, which involve night and day, all weather, and various sea state operations, EMALS and AAG successfully launch and recover a range of aircraft, including F/A-18E/F Super Hornets, E-2C/D Hawkeyes and Advanced Hawkeyes, C-2A Greyhounds, EA-18G Growlers, and T-45C Goshawks. In addition to CVN 78, GA-EMS is delivering EMALS and AAG for the future USS John F. Kennedy (CVN 79) and USS Enterprise (CVN 80). EMALS and AAG will provide greater flexibility over legacy systems to not only accommodate aircraft in the current air wing, but also future aircraft, including unmanned aerial vehicles. About General Atomics Electromagnetic Systems General Atomics Electromagnetic Systems (GA-EMS) Group is a global leader in the research, design, and manufacture of first-of-a-kind electromagnetic and electric power generation systems. GA-EMS’ history of research, development, and technology innovation has led to an expanding portfolio of specialized products and integrated system solutions supporting aviation, space systems and satellites, missile defense, power and energy, and processing and monitoring applications for critical defense, industrial, and commercial customers worldwide. NAVAIR Public Release 2020-732. Distribution Statement A - Approved for public release; distribution is unlimited.