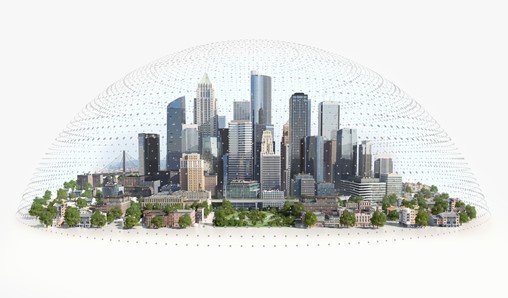 The Missile Defense Agency (MDA) relies on cutting edge technology to defend against new and evolving threats to the United States and allies. That’s where Lockheed Martin’s Long Range Discrimination Radar (LRDR) comes in. It will be the most advanced radar system in the world that will provide 24/7/365 long range ability to track, identify and help counter emerging threats and give decision makers the right information at the right time to decisively take action and defend the U.S. Facing rugged conditions and frigid temperatures at Clear Air Force Station in Alaska, Lockheed Martin and MDA teams just installed the radar’s first array, marking another milestone in LRDR’s progress. These mighty arrays, measuring a combined 60 feet high and 60 feet wide, pack in a lot of sensitivity that enables more accurate discrimination over longer distances. Not only is the system designed to address today’s threats, but it is also poised to adapt to new threats – like hypersonic threats – without hardware design changes. Up next: finishing up installation of the second array face and testing the remaining 10% of requirements. “LRDR is a crucial addition to the U.S. Missile Defense System portfolio of sensors for Homeland Defense,” said Chandra Marshall, program director, Lockheed Martin Missile Defense & Space Surveillance. “LRDR is a software defined radar that provides enhanced discrimination, improved reaction time, higher kill probability, highest operational availability and is scalable with an open architecture ensuring that this radar will continue to outpace current and emerging threats for decade to come.” Photo Courtesy: Missile Defense Agency LRDR will utilize its unique polarization approach to accurately identify threats in a dense operating space and help preserve the inventory of ground-based interceptors. Lockheed Martin engineers designed this next generation technology to be: Adaptable to Future Threats: The radar can be scaled and extended to adapt to new threat sets without changing the hardware design. Efficient and Reliable: Scalable and modular gallium nitride based “subarray” radar building blocks provide advanced performance and increased efficiency and reliability. Round the Clock Eyes on the Skies: Its unique maintain-while-operate capability provides very high operational availability and enables continuous operation. “Lockheed Martin’s solid state radar technology is the building block for the next generation of radars,” says Dr. Rob Smith, Vice President of Radar and Sensor Systems. “The technology provides our warfighters, as well as our allies, with crucial performance capabilities and mission flexibility.” As part of its investment into the advancement of solid state radar (SSR) which offers powerful capabilities to detect, track and engage sophisticated air and missile threats – f including the very complicated task of identifying and countering lethal objects present in enemy ballistic missiles –Lockheed Martin built a Solid State Radar Integration Site at its campus in Moorestown, New Jersey, and utilized this asset to test about 90% of the program requirements over the last year. This comprehensive testing of the radar proves the maturity of the LRDR product and reduces the timeline required to not only field LRDR but any future radars that leverage this technology. Photo Courtesy: Lockheed Martin Lockheed Martin will meet those maritime and ground-based missions with the next generation of advanced radar technology. It was designated SPY-7(v)1 by the U.S. Government in November of 2019 and it already has a jump start on production. “By using LRDR’s mature technology as the building block for SPY-7, we have been able to accelerate production of the radar. For example, we were able to order long lead material for production just a few months after program award. Normally that process would not begin for at least a year or two after contract award,” says Marshall. “Most importantly, the use of our SSR technology across multiple platforms allowed us to reduce the cost of our radar by ten percent.” Including LRDR, Lockheed Martin has been awarded 24 solid state radars, representing a total of 91 antennas of varying sizes and collectively composed of over 15,000 subarrays. These radars provide several times the performance of previous SPY-1 radars and can engage multiple threats simultaneously with the latest proven interceptors. The total number of subarray suites produced on LRDR is equivalent to production of eight Aegis SPY-1D radar sets. Why Lockheed Martin’s SSR is the World’s Most Versatile Radar Polarization diversity: Provides better fire control quality tracking, target classification, clutter suppression and electromagnetic environment mitigation. Most Efficient Architecture: Highest radar sensitivity for a given size, weight and power. High Operational Availability: Innovative operate-while-maintain architecture enables continuous 24/7 operation with no radar downtime for maintenance. Digital Beamformer: Robust digital beamformer enables efficient use of radar resources over a large scan volume and improved tracking of advanced threats. When safety and security depend on it, Lockheed Martin’s trusted solid state radars enable early awareness and clear information for decisive response to today’s threats … and tomorrow’s.