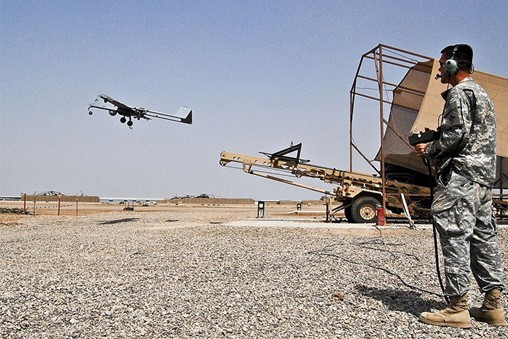 The US Army’s MFEW-AS electronic warfare system for Class-3 UAVs promises an enhancement to the electromagnetic capabilities of its Brigade Combat Teams. The Multi-Function Electronic Warfare – Air/Small (MFEW-AS) electronic warfare ensemble is envisaged for so-called ‘Class-3’ Unmanned Aerial Vehicles (UAVs), according to a US Army presentation. The US Department of Defence’s classification system for UAVs defines these aircraft as having a ceiling of 18,000 feet/ft (5,486 metres) and a maximum take-off weight of below 1,320 pounds (600 kilograms). Missions The MFEW-AS is the sibling of the MFEW-Air Large (MFEW-AL) electronic warfare system equipping the US Army’s General Atomics MQ-1C Grey Eagle medium-altitude/long-endurance UAVs. The MFEW-AL, which is currently undergoing flight testing, is to collect Communications Intelligence (COMINT) and Electronic Intelligence (ELINT) on radios and radars. While specific frequencies have not been published, it is reasonable to assume that transmissions between 30 megahertz and up to 40 gigahertz are within the MFEW-AL’s purview. Given the MQ-1C’s ceiling of 29,000ft (8,829m) the MFEW-AL may have a detection range for hostile emitters of up to 209 nautical miles (387 kilometres). This could allow the apparatus to collect COMINT and ELINT across an area of 181,666 square miles (470,513 square kilometres) optimising it for use at the operational level. CONOPS The MFEW-AS, on the other hand, appears intended for tactical level COMINT/ELINT collection. The MFEW-AS payload could equip US Army AAI RQ-7B Shadow tactical UAVs, and their successor aircraft. When outfitting the RQ-7B, the MFEW-AS could have a detection range of 151nm (279km), translating into coverage of 94,418 square miles (244,544 square kilometres). One concept of operations for the MFEW-AS could be for the MFEW-AL to gather information on the prevailing electronic order-of-battle at the operational level which will be sent to the manoeuvre commander’s headquarters. There, emitters of interest relevant to the manoeuvre force could be investigated further by the MFEW-AS which may gather more detailed information on these emitters’ signal characteristics. Electronic warfare staff back at the brigade headquarters could then use Raytheon’s Electronic Warfare Planning and Management Tool to task other US Army assets such as the force’s forthcoming Terrestrial Layered System (TLS) to electronically attack these emitters. Alternatively, they could be handed off as targets to other US Army kinetic or electronic effectors. Timetable The US Army presentation mooted that a prototype MFEW-AS be fielded in 2020. Lockheed Martin responded to a request for information from the US Army regarding the MFEW-AS in the autumn of 2019. The company stated that it planned to employ technology developed for the MFEW-AL in the MFEW-AS architecture. Although the prototype was mooted as entering service in 2020, US Army reports in March detailed a tentative service entry date of 2031 for the MFEW-AS capability. A further incarnation of the MFEW intended to equip US Army reconnaissance and light attack helicopters dubbed the MFEW-Air Rotary, has been tentatively scheduled for fielding in 2026. This system is expected to be used primarily for aircraft self-protection. Few details have been released regarding the current status of this project. The MFEW-AS will be a major enhancement to the US Army’s ongoing overhaul of its electronic warfare posture alongside the EWPMT, MFEW-AL and TLS, and to how its Brigade Combat Teams ply their trade on the electromagnetic spectrum.